This will be a very special evening with The Complete Unknowns playing an all Bob Dylan show and the Hoodoo Loungers (and friends) playing a tribute to The Band. 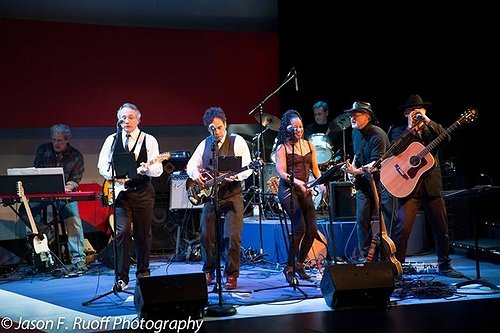 Sag Harbor, NY - February 13, 2015 - Bay Street Theater & Sag Harbor Center for the Arts is pleased to announce Bob Dylan & The Band: A Tribute, Saturday March 21 at 8 pm. This will be a very special evening with The Complete Unknowns playing an all Bob Dylan show and the Hoodoo Loungers (and friends) playing a tribute to The Band. Tickets are $25 and available online or by calling the Bay Street Theater Box Office at 631-725-9500, open Tuesday through Saturday 11 am to 5 pm.

Bob Dylan & The Band: A Tribute will be a concert not to be missed. The show will feature two bands playing a tribute to Bob Dylan and The Band. Bob Dylan's ten plus year association with The Band began in 1966 when The Band (then known as The Hawks) became Dylan's back up band. In 1967 they worked together on the legendary Basement Tapes and what became The Band’s legendary Music From Big Pink.

The Complete Unknowns is a celebration of the music of Bob Dylan. Covering Dylan's material spanning his six-decade career, the band provides a complete Dylan experience that showcases his songs as well as the great musicianship that brought them to life; players like Mike Bloomfield, Al Kooper, Rick Danko, Robbie Robertson, Russ Kunkel, Levon Helm and too many more greats to list here. Arguably the most prolific songwriter of our time, Dylan’s work has been interpreted by many from Jimi Hendrix to Nina Simone. The band’s mission is to entertain while maintaining the freshness and integrity of Dylan's work.

The HooDoo Loungers are a nine-piece East Coast based band, performing music inspired by the rhythms, sounds, history and spirit of New Orleans. The band's sound encompasses traditional New Orleans Jazz, Brass Band, classic R&B and funk - a blend of original music and re-arranged New Orleans classics. The HooDoo's perform a high energy and highly entertaining show that will please young and old alike. Since it's formation in 2008, the HooDoo's have performed at numerous East Coast music festivals and concerts as well as performing at top music venues such as the Paramount Theater (Huntington), The Stephen Talkhouse (The Hamptons) and B.B. Kings Blues Club (NYC).