Bay Street Theatre announces the 2014 Mainstage Season "A Season of Art and Revolution." 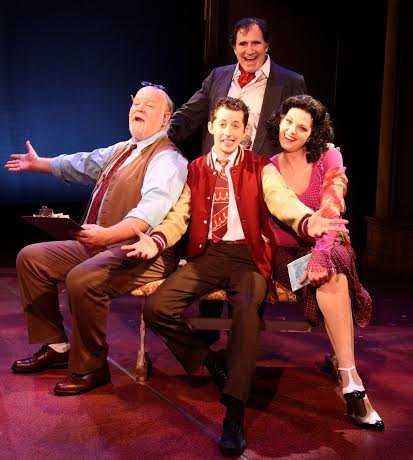 February 13, 2014 - Sag Harbor, NY – Bay Street Theatre is pleased to announce the three 2014 Mainstage Season productions, complete with two world premieres and a modern comedic classic!  The season begins on May 27 and runs through August 31. Subscriptions are available by calling the Box Office at 631-725-9500 or online at www.baystreet.org.

“I am so excited to announce Bay Street’s full 2014 season,” says Scott Schwartz, the new Artistic Director for Bay Street Theatre. “It’s a season about art and revolution!  By presenting two world premieres and a comic masterpiece by one of the greatest living playwrights, I hope to give our audience productions that are provocative, unusual, and most importantly entertaining. These plays and musicals start you thinking while engaging your heart and tickling your funny bone, and they tell compelling stories and raise issues that we hope will be the subject of conversation and debate all summer long.”

The Mainstage season begins with the World Premiere of CONVICTION, a modern drama, which will run from May 27 – June 15. The play is written by Carey Crim and will be directed by Scott Schwartz. It will be produced in association with the Royal Manitoba Theatre Centre, Rubicon Theatre Company and Dead Posh Productions.

CONVICTION tells the story of Tom Hodges, a charismatic, confident and caring teacher that students adore and parents admire. The smart, wise-cracking colleague with all the answers. The neighbor who takes care of the neighborhood. The perfect husband and father. But when a student accuses Tom of crossing a line, everything changes. This delicately balanced, beautifully nuanced new family drama digs deep beneath the surface of a happy suburban existence to explore the damage done when seeds of mistrust are planted. It asks the question -- How can we live with conviction when some questions cannot be answered?

For the second production, Richard Kind returns to Bay Street Theatre in TRAVESTIES, a Tony award winning comedy, which runs June 24-July 20. This Tom Stoppard classic will be directed by Gregory Boyd. Stoppard creates a smashing theatrical extravaganza with the wit of Oscar Wilde crashing headlong into song-and-dance, strip-tease, pie-fights, and brilliant wordplay. Set in 1917 and 1974 in Zurich, Switzerland, the play fantasizes how a British consul named Henry Carr (Richard Kind) encounters some of the most famous figures of the 20th century, including James Joyce, Tristan Tzara and Lenin, through an amateur production of The Importance of Being Earnest. Stoppard takes on the role of the artist in society in this exuberant and freewheeling comedy about art and revolution that is as fresh and thought-provoking as it is uproarious.

The season culminates with the World Premiere of MY LIFE IS A MUSICAL, which runs July 29-August 31. The musical has book, music and lyrics by Adam Overett and will be directed and choreographed by Marlo Hunter. Presented in association with Martin Platt, David Elliott, Cheryl Wiesenfeld, Joan Raffe & Jhett Tolentino, and Patrick Blake.

MY LIFE IS A MUSICAL is about Parker, who isn't like anyone else. When Parker wakes up in the morning and leaves his apartment, he hears people singing, he sees people dancing - and no other person on earth knows this is happening. Because Parker's life is a musical. And Parker hates musicals. This world premiere features a tuneful new score by Adam Overett and direction and choreography by Marlo Hunter, two rising stars of the musical theater. Follow Parker’s journey, both hilarious and human, as he struggles to hide his predicament from the world, tries to save a rock band, is pursued by a mysterious blogger, and possibly even finds love along the way.

The 2014 Mainstage Season is sponsored in part by New York State through the generosity of Assemblyman Fred Thiele and State Senator Kenneth P. LaValle; the New York State Council on The Arts, a State Agency; Town of Southampton; The Harold and Mimi Steinberg Charitable Trust; The Shubert Foundation; and fully or partially funded by the Suffolk County Executive’s Office. Previews weeks for all three productions are sponsored by Peconic Landing.