This fitting tribute will enable generations of New Yorkers to see the indelible mark Detective Steven McDonald left through his humanity and compassion. 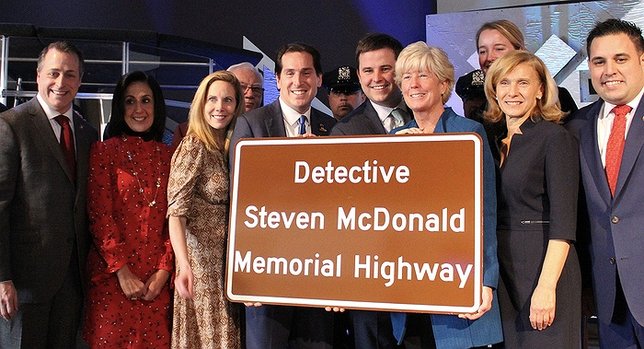 A portion of the Southern State Highway will be renamed in honor of the late Detective Steven McDonald.

Long Island, NY - February 12, 2018 - Senate Majority Leader John Flanagan (2nd Senate District), Senator Todd Kaminsky (9th Senate District) and Assemblyman Brian Curran (21st Assembly District) today joined with elected officials, New York Police Department leadership and the community to officially rename a portion of the Southern State Highway in honor of the late Detective Steven McDonald.
This fitting tribute will enable generations of New Yorkers to see the indelible mark Detective Steven McDonald left on our region through his humanity and compassion. While on duty in 1986 and with his wife Patty three months pregnant at home, then Officer McDonald was shot and paralyzed during an arrest.  In an inspiring moment of forgiveness in 1987, while still in the throes of recovery, he forgave the man who shot him by saying through his wife: “I forgive him and hope he can find peace and purpose in his life.”
From the time of the shooting through his death, Detective McDonald had to rely on a respirator to breathe and use a wheelchair for mobility, but he found strength in his family and his religious beliefs to spend his life helping to foster peace and understanding in our region, our state and our nation.
To honor his legacy, the New York State Senate passed legislation this past June to rename the roadway. It ceremonially renames the section of the Southern State Parkway that runs from the Belt Parkway to the Meadowbrook Parkway as the “Detective Steven McDonald Memorial Highway” and directs the state Department of Transportation to post signage specifying the designation.
The bill (S6549) was jointly sponsored in the Senate by the entire Long Island Senate delegation, including Senators Elaine Phillips, Kemp Hannon, Carl L. Marcellino, John Brooks, Phil Boyle, Kenneth LaValle, and Thomas Croci, and former New York City police officer Senator Martin Golden.
“Detective McDonald was a truly inspiring public servant who used his life, both before and after he was wounded, to bring hope to others.  He is a true hero who showed us all what it means to be an exemplary human being. This designation will help be a reminder to all of Detective McDonald’s sacrifices, his lessons of forgiveness, and the strength of his family and community in supporting him. I thank my colleagues for bringing this to reality and the McDonald family for allowing us all to learn what compassion means,” stated Senate Majority Leader Flanagan.
“Few people possess the courage and the capacity for forgiveness like Detective McDonald,” said Senator Todd Kaminsky. “I consider it a great honor to have known him. Our children do not have to rely on superhero movies to learn about heroics -- they just need to learn about Detective McDonald. This is a fitting tribute to a true hero and will ensure that his legacy of love and hope will endure for years to come."
“Along with Senate Majority Leader John Flanagan and Senator Todd Kaminsky, I am proud to be a part of honoring Detective Steven McDonald with the renaming of the Southern State Parkway,” said Assemblyman Brian Curran (21st Assembly District). “Today it becomes official. The renaming of this highway honors the life, service, sacrifice and family of Detective McDonald. Every day when residents drive this stretch of highway bearing his name, they will be reminded of the extraordinary life he lived, but just as importantly the manner in which he lived it. Steven McDonald was a living symbol of peace and forgiveness and an example for all us. We are proud of Det. McDonald and we thank his family for their sacrifice.”
“The Detective Steven McDonald Memorial Highway will touch both the City of New York and the Village of Malverne in Nassau County, where he lived with his family. By teaching peace and forgiveness, despite the challenges he so bravely faced, Steven touched the world. That’s exactly what Detective Steven McDonald did in life, and it’s what he continues to do as we remember his courage, his strength and his sacrifice,” said NYPD Commissioner James P. O’Neill.