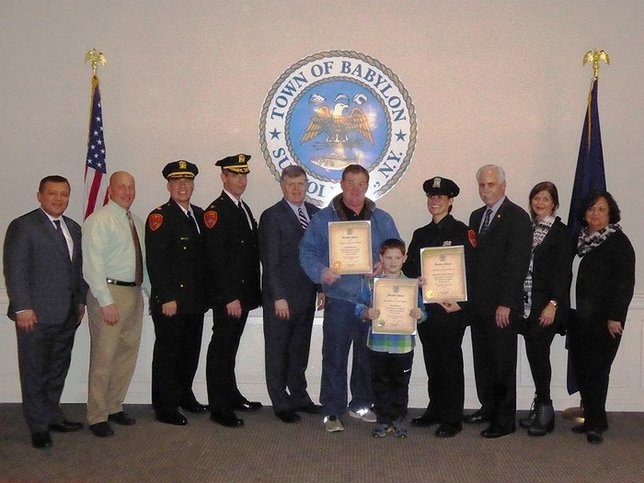 The events leading up to this celebration took place just one week earlier at the docks along a canal in Babylon Village. A twelve-year-old boy was playing just a little too close to the water when he lost his footing and fell into the frigid water. The boy struggled to free himself and began to scream for help in desperation. Fortunately, seven-year-old Finn Chatterton and his father, Patrick, were not too far away. Finn heard the faint sound of screams and alerted his father, and together they were led to the docks. Soon thereafter, Officer Derkevics arrived on the scene, as did a number of Village personnel.

Patrick explained how he used a shovel to help pull the twelve-year-old out from the water, as Officer Derkevics kept the boy as calm as possible. By working together, they succeeded in getting the boy to safety and averted what would likely have been a devastating tragedy to the community.

“I am just so thankful that we have such caring and quick-thinking people here in Suffolk County,” said McCaffrey. “We would not have had this happy conclusion if it were not for these three individuals. I hope that this incident serves to remind all of us just how dangerous it is to be by bodies of water alone, especially for a child.”

To learn more about Legislator Kevin McCaffrey’s work in both the Suffolk County Legislature and the community, those interested are strongly encouraged to visit his website.