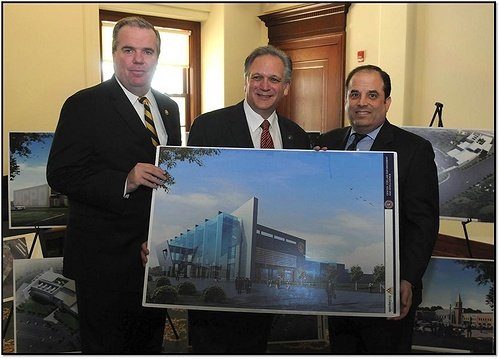 “Nassau is the safest large suburban County in the nation and we intend to keep it that way,” said County Executive Mangano. “My administration, via a partnership with the Police Foundation, will construct a new, state-of-the-art center for training local law enforcement. With this step, we move police training from out-dated facilities to a modern venue that advances our nationally acclaimed intelligence-led policing models.”

The Center for Training and Intelligence includes a new Police Training Academy, Asset Forfeiture and Intelligence Bureau, an Emergency Vehicle Operations Course and a tactical village that allows for scenario-based training, such as simulated drug raids and hostage barricade situations. The Center will serve as a redundancy center for the NCPD’s Communications Bureau and as emergency responder housing for Federal, State, and local first responders during emergencies. The Center will include modern classrooms, a lecture hall and auditorium that can be used for large-scale training, ceremonies, national conferences, and private sector functions, as well as a dedicated Physical Training and Defensive Tactics Area that will properly prepare recruits for the rigors of police work.

Due to its proximity, the facility will create significant synergies with the Community College and provide an opportunity to generate revenue for taxpayers by hosting national police conferences and as a site for filming by Nassau’s growing movie and television production industry.

Nassau County recently issued a Request-for-Proposals seeking design services for the Center. Construction of the approximate 120,000 square foot facility is expected to begin in the fall of 2015 and be completed in 2017. The Center will replace the current Police Academy, which has been housed since 2006 at the former Hawthorne Elementary School in Massapequa Park. Prior to that, the Academy was located in trailer-style modular buildings at the Nassau County Correctional Center in East Meadow and at the Cross Street School in Williston Park. Nassau County currently spends approximately $700,000 in rent to lease the Hawthorne School for its Police Academy and will thereby save taxpayer funds over the life of the new facility.

“Our current facility was built and designed as a grammar school, not a Police Academy,” said Acting Commissioner Krumpter. “Good training is the key to disciplined, effective and fair policing and this new, upgraded and, most importantly, permanent facility will give us everything we need to provide the best and most up-to-date police training to our members.”

“We are proud to be a part of this important project that will provide our law enforcement officers with a state-of-the-art training facility,” said Eric Blumencranz, Chairman of the NCPD Foundation. “The NCPD is one of the best police departments in the country and this facility will allow them to train for 21st century policing threats which will continue to make Nassau County one of the safest places to live.”