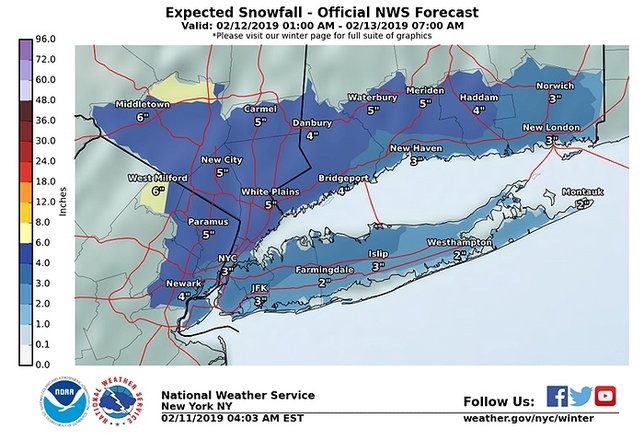 UPDATE - February 12, 2019 - Today's forecast has been revised. Snow is now expected to start at 10 a.m. and last until about 1-2 p.m., at which time it will transition over into sleet/freezing rain. Snowfall estimates remain approximately the same as before and icy conditions are expected on roadways that could affect the evening commute. Residents are advised to exercise caution when driving.
Below is the original report.
Long Island, NY - February 11, 2019 - While the weather overall seems to be relatively light on frigid precipitation so far this season, the Long Island regions is set to get at least a taste of winter this week in the potential form of a few inches of snow and freezing rain according to the National Weather Service (NWS), which has issued a Winter Weather Advisory from 5 a.m. Tuesday through midnight Tuesday night.
NWS reports that snow – possibly mixed with sleet – is expected to develop Tuesday morning around 5 a.m., and from there will continue throughout the morning with a possible accumulation of up to one inch per hour as the morning progresses. Come early afternoon, the snow is expected to transition into a mixture of snow and rain before eventually transitioning completely into rain by the evening.
According to the latest NWS snowfall projections, Nassau County is forecast to receive between 3 and 4 inches; Suffolk County is expected to get 2 to 3 inches; and the East End of Long Island, 1 to 2 inches. Ice accumulations of around one tenth of an inch expected with winds gusting as high as 35 mph, which – combined with reduced visibility – will make for potentially difficult and slippery roadway conditions for motorists. The Tuesday morning (and possibly evening as well) traffic commute is expected to be impacted by the weather and residents are advised to exercise caution while driving.
Temperature highs on Tuesday are expected to hit 35 degrees, but wind chill values - with an east wind 13 to 21 mph - will cause that to drop to between 15 and 20 degrees. Conditions are expected to improve on Wednesday; after some possible rain in the early morning, conditions are expected to be partly sunny with a high near 43. 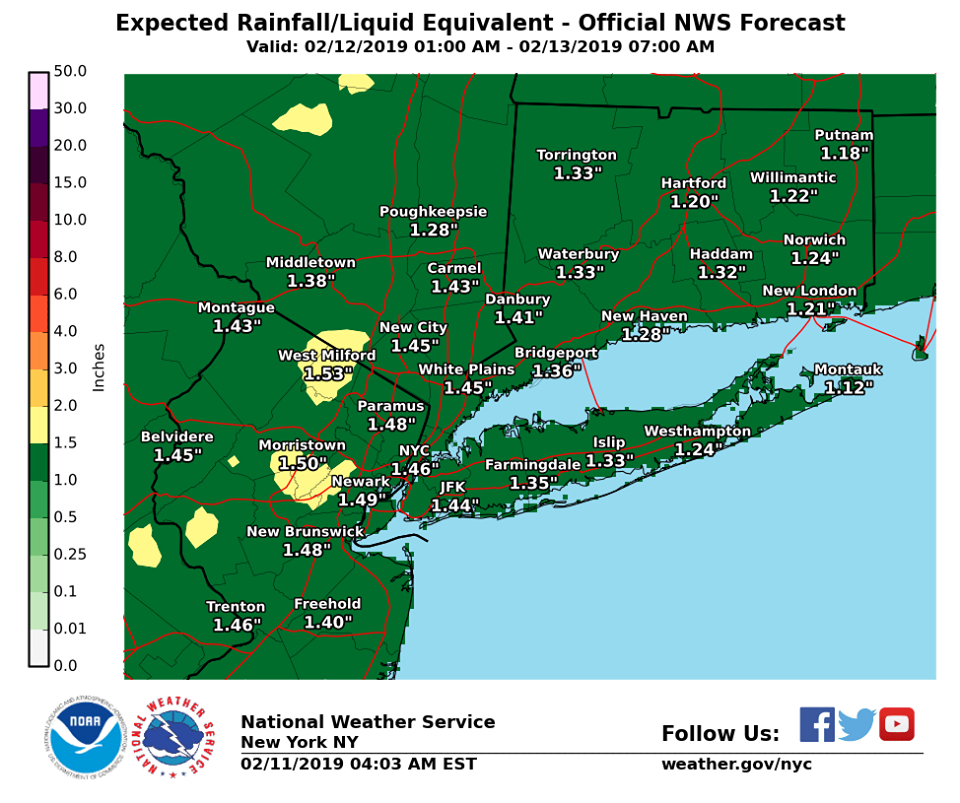 Photo Credit: National Weather Service
PSEG Long Island has issued the following information in light of the upcoming inclement weather:
The full current NWS forecast throughout the upcoming weekend is as follows: