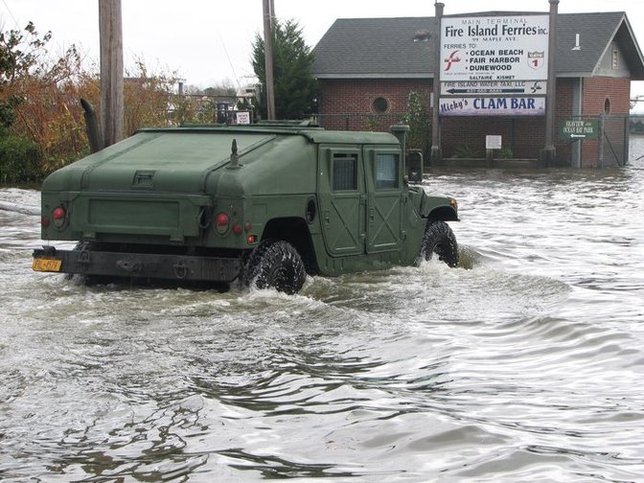 A National Guard Humvee barrels through the flood waters in a South Shore neighborhood after Hurricane Sandy.

“I said it before and I’ll say it again: Nassau’s Back Bays project is, quite simply, a must-fund,” said Schumer. “I applaud the Army Corps for heeding the call and validating this project as a major priority so that Long Island’s South Shore communities are better protected and more resilient in the future.

Today, the Nassau Back Bay feasibility study sets sail and the work we so desperately require will soon begin. We must make sure the vulnerabilities to our South Shore communities are addressed in the event of a future storm and this funding will help get that job done.”

"This is a sign of progress, and we would like to sincerely thank Senator Schumer for his tireless advocacy as, together, we fight to build a safer barrier island,” said City Councilwoman Eileen J. Goggin. “On behalf of coastal municipalities, we share frustration with the pace of the progress. However, we will continue to aggressively advocate for additional state and federal funding to protect our neighborhoods from flooding to adopt a comprehensive approach to solving the issues that all coastal communities in our area are currently facing.”

Schumer said that the Army Corps allocated some of these account funds to begin work on Nassau County’s Back Bays feasibility study, which is a critical next step in the process of securing additional federal dollars for specific protections along the south shore.

This study will examine the coastal flooding that occurred during Superstorm Sandy, test various solutions to prevent such flooding and make a final recommendation on how best to alleviate flooding along Nassau's back bay communities.  The study will analyze various options from raising additional homes to tidal surge gates at the Jones and Rockaway Inlets.

Schumer personally urged the Army Corps to make sure this Nassau project had the funding necessary to move forward in this year’s Army Corps’ work plan so locals can prioritize specific South Shore protections while working to secure the federal funding that will help to make them a reality.

Schumer further notes, the $200k in federal work plan dollars will allow the study to begin soon. As for next year, the Army Corps has also proposed an additional $300k in funding for this project, allowing the agency to finalize the Back Bays study.

Historically, Nassau County’s Back Bay communities have endured flooding on numerous occasions. After Superstorm Sandy, Long Beach, Island Park, Oceanside, Baldwin, and Five Towns were extensively flooded. On the Long Beach barrier island, the ocean met the bay. According to the comprehensive U.S. Geological Survey’sObserved Storm Surge Mapper from October 29th, 2012, it is clear there was storm surge on both the oceanfront and Bayfront side of the barrier island.

In addition to Superstorm Sandy, these south shore communities experience severe flooding during regular high tides and heavy rainstorms.  Freeport's Nautical Mile, Island Park's Austin Blvd. and Nassau Expressway in the Five Towns are prone to flooding during the lightest of rain storms.