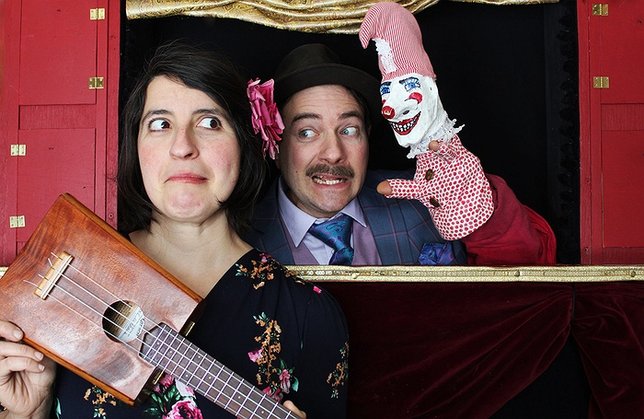 The Perils of Mr. Punch.

Sag Harbor, NY - February 6, 2019 - Bay Street Theater & Sag Harbor Center for the Arts is pleased to announce that Goat on a Boat @ Bay Street will present shows beginning March 2 at 11 am with The Perils of Mr. Punch. Tickets are on sale through goatonabout.org or by calling 631-725-4193. They are not for sale at the Box Office at Bay Street Theater.
Full Spring Schedule:
Saturday, March 2 @ 11am – The Perils of Mr. Punch follows the troubles and travails of puppetry’s favorite loudmouth, Mr. Punch. Nothing ever goes right – his dog looks suspiciously like a skunk, his baba doesn’t behave, and crocodiles appear around every corner. The skillfully operated hand puppets are chock full of surprises and tricks, as is the elaborate stage.
Friday, March 8 @ 8 pm –Yael Rasooley’s Paper Cut will be presented in honor of International Women’s Day. The all new special puppet show has toured world-wide and is for adults with a wine reception afterwards. The story starts as a lonely secretary remains in the office after everyone else has gone home. From her little corner, using photos from old film magazines, she escapes into a work of daydreams. There she is a glamorous movie star from the 1940s and finds her ideal love at last. But as the story unravels, as imagination and reality collide, her romantic tale becomes a Hitchcock nightmare.
Saturday, March 9 @ 11 am – Fox Fables is a combination of several Aesop’s Fables. The story is about a fox who loses his precious tail and with it his identity.
Saturday, March 16 @ 11 am – The Fairy Tailors is about the Fairy Tailor who is hard at work in her enchanted shop where dressing racks and laundry baskets are known to have a mind of their own. Watch as she transforms everyday garments into extraordinary characters, and shares stories of bravery, from Little Red Riding Hood (ie), to The Emperor’s New Clothes.
Saturday, March 23 @ 11 am –  To celebrate World Puppetry Day, Monster Circus will be presented by CactusHead Puppets, which is a circus like no other. Monster’s Caretaker guides the audience through the world of monsters, and maybe even lend the monsters a hand. Join Goat on a Boat and CactusHead Puppets for a free puppet making workshop after the performance to celebrate World Puppetry Day.
Saturday, March 30 @ 11 am – The Chicken Show features Henrietta, the singing chicken who longs to be a star on Broadway but the Mean Ol’ Farmer is going to put her in a stew if she doesn’t produce an egg by morning. Find out how Henrietta, with the help of her friends learns to believe in herself to make her dreams come true.
The Goat on a Boat Puppet Theatre is a non-profit puppet theater committed to introducing young children and their families to a lifelong love of theater and the creative arts since 2001. It is among only 50 established puppet theaters listed by the Puppeteers of America, the only national organization of puppeteers. Through puppet shows and special events, Goat on a Boat invites families to be entertained and to become involved in their own cultural and creative education.
Bay Street Theater is a year-round, not-for-profit professional theater and community cultural center which endeavors to innovate, educate, and entertain a diverse community through the practice of the performing arts. We serve as a social and cultural gathering place, an educational resource, and a home for a community of artists.