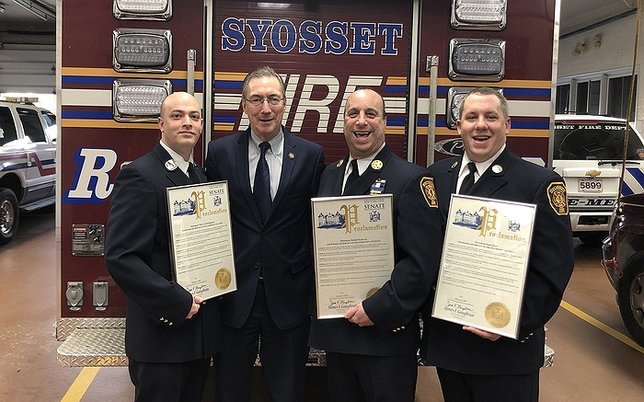 Syosset, NY - February 4, 2019 - Senator Jim Gaughran recently honored Syosset Volunteer firefighters by presenting them with a Senate Proclamation at the Syosset Fire Department.
On January 6th firefighters Josh Kerr, Robert Kaplan, and William Sauberman rescued a 71-year old man from a kitchen fire in his home. Gaughran honored the heroes with an official New York State Senate Proclamation. The firefighters and their families will also travel to Albany where they will receive a Senate Resolution and Senate Liberty Medal for their heroic actions.
Senator Jim Gaughran said “Our first responders are the unsung heroes who serve and protect our community with distinction. Too often their bravery goes unnoticed or unthanked. Today we are here to thank our local heroes Josh, Robert, and William for their extraordinary actions on a cold winter day, which saved a life.”