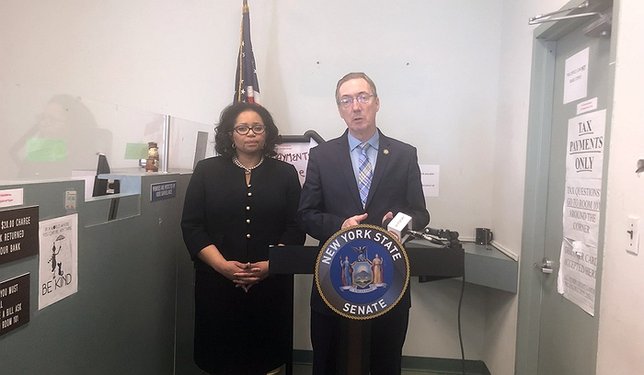 Huntington, NY - February 1, 2019 - Today, Senator Jim Gaughran and Huntington Receiver of Taxes Jillian Guthman announced passage of state legislation co-sponsored by Gaughran to allow tax relief for thousands of federal workers on Long Island. The legislation will allow federal employees, spouses of federal employees who were furloughed, or non-pay federal workers a 90-day extension following a government shutdown to pay their property taxes. The bills passed the State Legislature and are expected to be signed by the governor.
Senator Jim Gaughran said “This legislation to extend deadlines for tax payments to local governments is vitally important for the federal employees who went 35 days without a paycheck during these tough winter months. Since deadlines for tax payments to local governments differ across New York State, it is essential that we get this information out to federal workers so that they can take advantage of this small offering by New York State.”
Huntington Receiver of Taxes Jillian Guthman said “We are pleased to be able to offer this small bit of assistance to the thousands of workers and their families who were unfairly affected by the government shutdown. Thank you Senator Gaughran for your leadership in helping provide tax relief for Long Islanders.”