Yet More Snow Coming; Most Parts of Long Island Getting 1-2 Inches or More Overnight, Danger of Icy Roads in Morning

Biting cold, snow, and ice will be making their presence known felt for the next several days, and residents are advised to exercise caution due to the hazardous road conditions that may result. 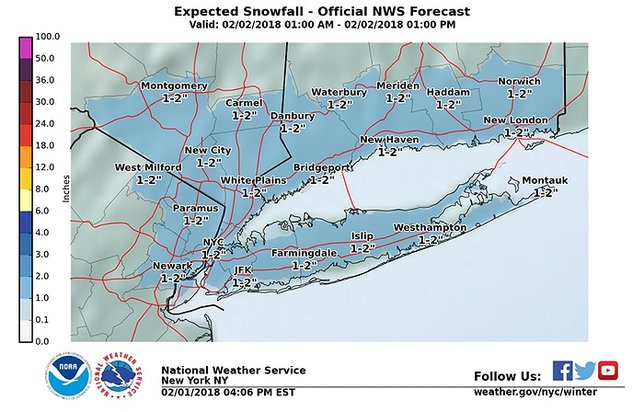 Long Island, NY - February 1, 2018 - No, we’re not out of the woods yet in terms of unpleasant winter weather, Long Islanders. Far from it, in fact, judging from the forecast, with biting cold, snow, and ice making their presence known – and especially felt – for the next several days, and residents are advised to exercise caution due to the potential hazardous road conditions that may result.
According to the National Weather Service (NWS), a cold front is forecast to move across the Long Island area tonight and into early Friday morning. Precipitation with the front is expected to start as rain, but as colder air moves in behind the front, the rain is expected to change over to a wintry mix before transitioning to pure snow after midnight.
Unlike most recent snowfalls where Suffolk County is typically the hardest hit, in this instance most parts of Long Island are expected to see a uniform 1-2 inches of snow by Friday morning. However, as temperatures fall towards and below freezing by morning, there is a high threat for icy conditions to develop during the morning commute, resulting in hazardous driving conditions. Again, residents are asked to use caution while driving to work or school. Temperatures Friday are eventually expected to hit a high of around 31 degrees, but will drop drastically by evening into the teens or lower; wind chill factor, however, will make it seem as cold as zero degrees or less.
While the National Weather Service has noted that overall Long Island snowfall accumulations should be between 1 to 2 inches, they were unable to rule out some locations seeing up to 3 inches if any heavier snow bands develop, or if the rain change-over to snow is an hour earlier than expected. Below is a NWS map displaying the chances for various parts of Long Island to receive more than 2 inches of snow overnight. 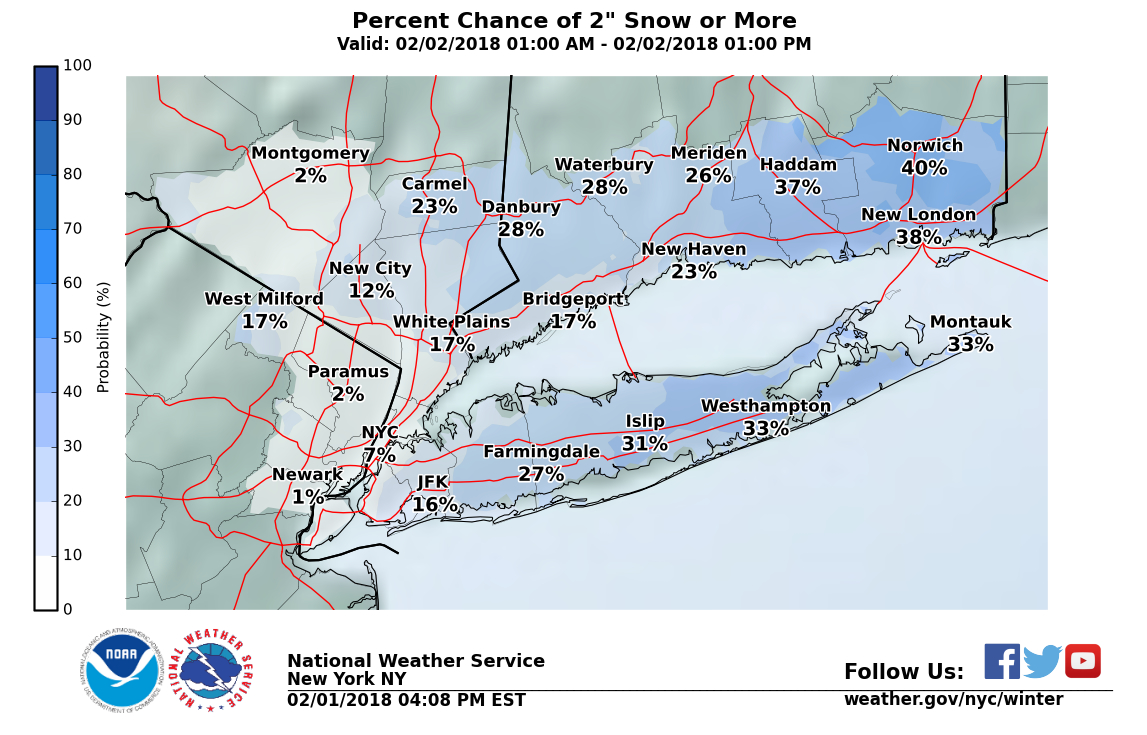 Areas of Long Island that could get over 2 inches of snowfall overnight. Photo Credit: National Weather Service
Friday does not represent the last snowfall Long Islanders will see this weekend, unfortunately- a chance of snow exists in the forecast for Saturday night, which is expected to change over to rain on Sunday. Sunday evening threatens yet more snow, possibly in the form of a wintery mix changing over to rain. One thing is for sure- it’s going to be cold and wet for next couple of days, so make sure you bundle up if you go outside to brave the weather.
The complete weather breakdown for the weekend is as follows: