ALS, or Lou Gehrig's disease, is a fast-progressing neurodegenerative disease that affects nerve cells in the brain and the spinal cord. 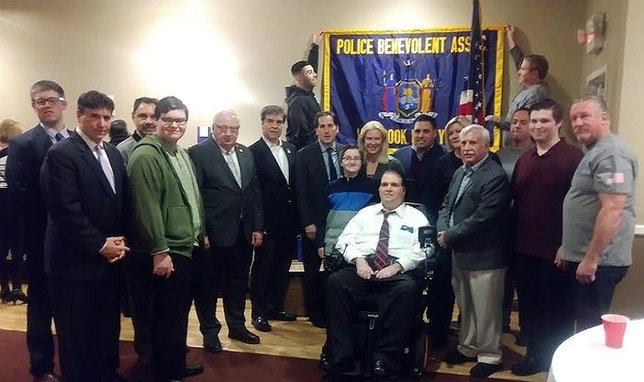 Senator John Brooks with supporters at a fundraiser for Police Officer Ronald Fleury (in wheelchair).

Long Island, NY - February 1, 2018 - Senator John Brooks joined supporters at a fundraiser last night for Lindenhurst resident, Lynbrook Police Officer Ronald Fleury, who is living with ALS. Ron, who is married, with three children under the age of 19, was diagnosed last February with the disease amyotrophic lateral sclerosis, more commonly known as ALS or Lou Gehrig's disease. ALS is a fast-progressing neurodegenerative disease that affects nerve cells in the brain and the spinal cord.
Ron’s friends and colleagues say that he is facing this diagnosis with courage and selflessness and his main concern is how his family will fare as this terrible disease progresses. Ron’s supporters want to help minimize the financial impact this disease will have on his family. Expenses include a motorized wheelchair, renovations to his home, making it wheelchair accessible, a wheelchair-accessible van to take him to his many doctor appointments, as well as extremely expensive, newly-approved medications.
Donations can be made to the Ronald J. Fleury Family Trust and at Go Fund Me: https://www.gofundme.com/rjfleury.