Governor Cuomo announced the launch of “Control Isn’t Love,” a social media advertising campaign to educate teens & adults about the signs of teen dating abuse and where to seek help. 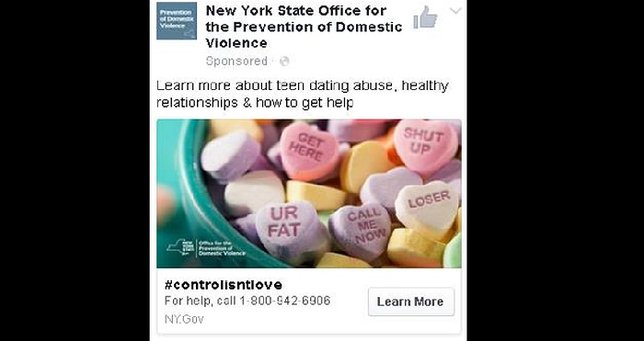 Albany, NY - February 1, 2017 - Governor Andrew M. Cuomo today announced the launch of “Control Isn’t Love,” a social media advertising campaign to educate teens and adults about the signs of teen dating abuse and where to seek help. The online campaign will target younger audiences and parents through Instagram and Facebook ads that will appear throughout February, which New York State marks annually as Teen Dating Violence Awareness and Prevention Month.

“With this campaign, we are taking an important step to reach teens and young adults in order to educate and crack down on dating abuse,” Governor Cuomo said. “By opening communication between parents and their children, we also want to foster serious discussions and smart decisions to assist others in need.”

The social media ads feature iconic candy conversation hearts but the messages are controlling and demeaning – Loser, Don’t Wear That, Answer Me and others – to illustrate a common form of teen dating abuse. The advertisements will be branded #controlisntlove and link to a newly redesigned website detailing information and resources, including the state’s Domestic and Sexual Violence Hotline at 1-800-942-6906. The toll-free hotline provides help and information 24 hours a day in English, Spanish and other languages, and individuals who are deaf or hard of hearing can call 711.

State officials and victim advocates highlighted the campaign during a visit to Troy High School in Rensselaer County this morning. The Instagram and Facebook ads began today and run through the end of the month across the state outside of New York City.

Gwen Wright, Executive Director of the State Office for the Prevention of Domestic Violence, said, “We know that dating violence can begin very early, as young people are starting to experience romantic relationships. Controlling behaviors, such as requiring a ‘check-in’ or knowing where you are going or who you are with at all times, are often mistaken for commitment or love. This campaign aims to highlight the types of messages that should be considered red flags and offers resources for help and more information.”

At Troy High School, students from the We As Voices and Educators (WAVE) Club and other teens wrote supportive messages on paper conversation hearts to counter negative ones featured in the campaign and a “photo booth” display at the school. Teens completed a sentence featured on the hearts, “I’m changing the message by …,” posed for photos with the virtual valentines at the display and posted them to social media using the #controlisntlove hash tag and @NYSOPDV handle.

New Yorkers of all ages are encouraged to join the campaign and raise awareness in their communities:

WAVE Club members are committed to social change, specifically in the area of stopping violence against women, girls and LGBTQ people and fighting sexism that affects both men and women. The Club and their advisor, Student Assistance Counselor Bruce Margolis, work with Unity House, developing young people into leaders who can advocate and educate others about these issues. Unity House (www.unityhouseny.org) serves victims of domestic violence and also operates a state licensed shelter; it also is one of 223 victim assistance programs funded by the state Office of Victim Services.

State Office of Victim Services Director Elizabeth Cronin said, “Most victims of dating violence are girls between the ages of 16 and 24, with some victims of domestic violence reporting being abused as young as 11. This startling statistic underscores that teen dating violence is a serious issue. My agency stands with the Office for the Prevention of Domestic Violence and supports its efforts to educate teens, teachers and the public that teens deserve healthy relationships and if they find themselves in an abusive relationship, there is help available and they are not alone.”

About the NYS Office of the Prevention of Domestic Violence
The Office for the Prevention of Domestic Violence (www.opdv.ny.gov) is charged with improving the response of state and local communities to domestic violence. OPDV provides guidance to Executive staff on policy and legislation; conducts statewide community outreach and public education programs; and trains professionals on addressing domestic violence in a wide array of disciplines, including child welfare, law enforcement and health care.

About the NYS Office of Victim Services
The Office of Victim Services (www.ovs.ny.gov) provides a safety net for individuals and/or their families who have been victims of crime through no fault of their own and have no other means of assistance. The agency can pay medical, dental and mental health bills, lost wages and support, and burial and funeral expenses, among other types of assistance. Compensation is funded through fines, fees and surcharges paid by certain offenders convicted in federal and state courts, not taxpayer dollars.