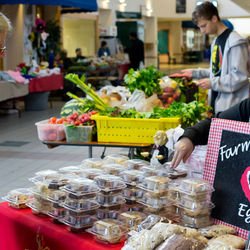 “Buying New York products helps New York farmers, and strengthens this state’s agriculture industry – something that becomes even more important in the winter months,” Governor Cuomo said. "I encourage all New Yorkers to find a winter farmers' market and plan a visit.”

The number of winter farmers markets in New York State has grown 198 percent since the 2007 season.

State Agriculture Commissioner Richard A. Ball said, “More and more consumers are embracing New York agriculture as a year-round business, which is tremendously beneficial to our farmers and producers. Through initiatives such as the Governor’s Taste NY program as well as winter farmers’ markets, it is now easier than ever for New Yorkers to support this huge sector of the economy.”

The Winter Farmers' Market Dataset includes information detailing the hours of operation and location of community farmers’ markets as well as the name and phone number of the market manager.

To confirm the hours and location before traveling, contact the local market.