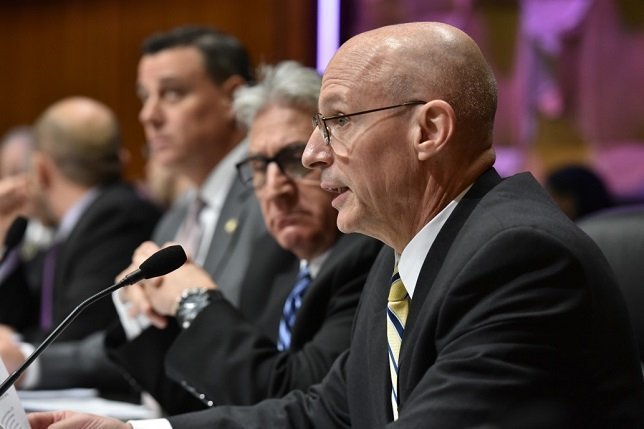 Albany, NY - January 30, 2018 - As part of today’s economic development hearing in Albany, Assemblyman Dean Murray (R,C,I-East Patchogue) questioned the legitimacy of certain economic development programs. This includes the governor’s tax-incentive program, Start-Up NY, which has spent $53 million in advertising and created only 1,135 jobs, according to a December 31, 2016 report. At the hearing, Empire State Development CEO and Commissioner, Howard Zemsky, testified before a panel of state legislators.
“As part of the enacting legislation for that program (Start-Up NY), it was required that 40 percent of the advertising be done in state,” Murray said to Zemsky. “Why are we spending literally tens of millions of dollars on in-state ad campaigns, when it’s designed to bring companies from out of state?”
Murray also brought to light almost $750,000 of taxpayer money doled out to fund Gov. Cuomo’s commercial that aired statewide during the holidays offering ways for residents to sidestep the federal tax plan that took effect this year. Murray sent a letter to Zemsky questioning the cost of the commercial and its effectiveness in early January.
“Now, we’ve still not determined whether or not that is actually going to benefit them (taxpayers) but it was done as a kind of preemptive thing by the governor…and yet ESD spent nearly three-quarters of a million dollars in advertising the governor’s executive order, and I can’t help but ask is this another taxpayer-funded promo for the governor?,” Murray continued.
“Because all of New York heard about his executive order, why did we need to run $643,000 plus dollars’ worth of TV ads, another $65,000 worth of radio ads, and then social media, print and everything else?”
Assemblyman Dean Murray represents the 3rd District in Suffolk County. For more information, visit Assemblyman Murray’s Official Website.