At least 30,000 New Yorkers - including immigrants, refugees, Muslims and allies - gathered to demand that Trump rescind his recent executive orders and end all hateful policies. 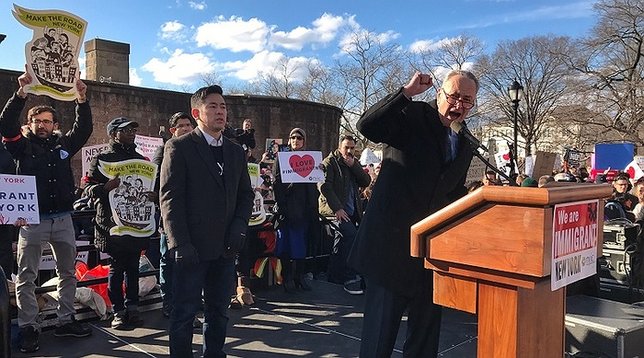 Vow to fight Trump's hateful policies every step of the way

New York, NY - January 29, 2017 - At least 30,000 New Yorkers - including immigrants, refugees, Muslims and allies - gathered in Battery Park City across from the Statue of Liberty to demand that Trump rescind his recent executive orders and end all hateful policies. 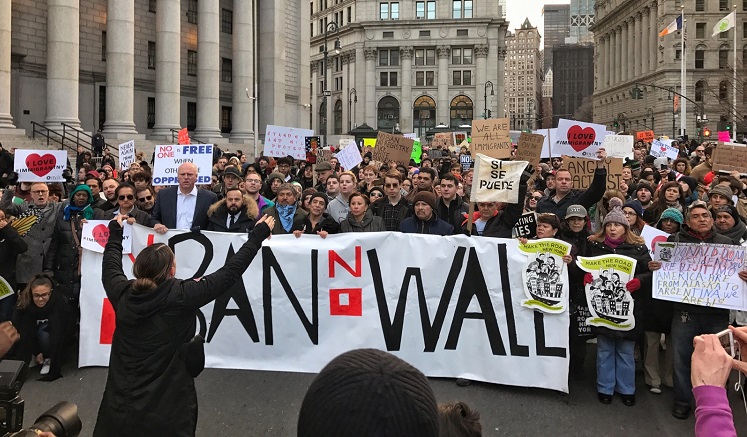 They then marched to Foley Square, wearing colorful butterfly wings and signs reading, "no ban, no wall" and "here to stay." The march comes the day after massive protests -- organized by Make the Road New York and the New York Immigration Coalition, among others -- rocked JFK airport and Cadman Plaza, demanding release of refugees who were being held at the airport under Trump's "Muslim ban."

Last night, in response to a lawsuit brought by the ACLU on behalf of the refugees who had been held, federal judge Donnelly in Brooklyn issued a stay on Trump's Muslim ban. This means that those who would've been allowed into the US before the ban are, for the time being, not subject to deportation, though they can still be detained and refused entry.
More than ten people are still detained at JFK airport. Marchers today demanded their release and an end to this vicious and unjust practice, and called uncompromisingly for justice for all who are impacted by Trump's policies. Protests are spreading across the country. There are actions organized by Make the Road Connecticut and Make the Road New Jersey happening in the next 48 hours, among many others.

Javier Valdés, Co-Executive Director of Make the Road New York, said: "Today thousands of people from Make the Road New York's community - including our immigrant members and members of our aliados (allies) network - came together with other New Yorkers to make it crystal clear that we will fight Trump's anti-Muslim and anti-refugee policies every step of the way. The energy is spreading, and protests are occurring across the country. Our sister organizations, Make the Road New Jersey and Make the Road Connecticut are getting ready to take action in their states, as are many, many others. Our message is clear: We will not let Trump separate families and attack our communities."
Steve Choi, Executive Director of the New York Immigration Coalition, said: "This weekend, we saw thousands of New Yorkers come out to protect immigrants and refugees in an outpouring of both love and anger at the fear-mongering and hate wrought by President Trump's executive orders. And we're starting to win. Less than 48 hours after the orders were signed, our efforts and those across the country helped stop the order in court - and forced the White House to allow American legal permanent residents from those countries to come back home. This is just the start. We're ready to mobilize this mass movement - immigrants and allies, Muslims and Jews, New Yorkers of all stripes - to show the White House what our New York and our country really stand for: dignity, justice, and inclusion."
Donna Lieberman, Executive Director, New York Civil Liberties Union, said: "The United States is not a country that should stand for religious discrimination and for putting the lives of vulnerable children at risk during the greatest refugee crisis since World War II. President Trump's ban on the entry of people from Muslim countries and suspension of the entire U.S. refugee program goes against everything this country represents from the very day it was founded. We are proud of the work of the ACLU in stopping parts of Trump's order and our lawyers for working with those whose loved ones are detained or at risk. With the support of mass protests around the country, we will never stop defending our values and our Constitution."
Fahd Ahmed, Executive Director of Desis Rising Up and Moving (DRUM), said: "We now have confirmations that Customs and Border Protection has been violating the Judge's stay order. Department of Homeland Security issued a statement in clear defiance of the judge's order, and they are putting people on planes back for deportation. At least 5 people were scheduled to be put on a plane for 1:30pm. This isn't a matter of "bad policy", but rather an administration and their aligned forces that are committed to an ideological agenda of white supremacy, xenophobia, Islamophobia, and bigotry."
Mohammad Khan, Campaign Manager, MPower Change, said: "This moment calls for us to be consistent and persistent in our outrage and demand that the Administration abide by the constitution and uphold fundamental values of inclusion and respect. MPower Change is committed to a type of organizing that keeps our voices loud and feet in the streets."
Jackie Vimo, policy analyst at National Immigration Law Center, said: "We continue to receive reports that agents are threatening to put refugees and others on planes and out of this country. This blatant disregard for a federal order is simply unacceptable. At a minimum, all agents should comply with the order immediately. But the truth is that DHS's messaging continues to instill fear in the community. We should demand nothing less than that the government rescind this heinous executive order. It has caused irreparable harm already, and we will not stop fighting until the government protects the rights of our clients and those like them.The National Immigration Law Center, with our partners, will continue to fight. No Ban. No Wall."

Bill Lipton, Working Families Party State Director, said: "The Working Families Party stands side by side with our brothers and sisters who are refugees, Muslims and immigrants. In New York and across the country we will stand up to resist Trump's hate. Yesterday 14 million people watched WFP's livestream of the demonstrations, and our support is growing every day. We will not stop until we win opportunity and equality for all who are in the US, no matter how recently they arrived."
Jennifer Friedman, Director of Immigration at The Bronx Defenders, said: "The administration's actions are extreme, dehumanizing, and urgently require a response from all people of conscience in this city and across the nation," said Jennifer Friedman, Director of the Immigration Practice at The Bronx Defenders. "Our presence on the streets makes a difference. We must make clear that we will not tolerate anti-Muslim, anti-immigrant bigotry in our name."
Shelby Chestnut, Director of Community Organizing and Public Advocacy at the New York City Anti-Violence Project, said: "The New York City Anti-Violence stands in solidarity w immigrant and Muslim communities around New York City as we move into the second day of protests following Trumps Executive Order banning refugees and Muslims from seven countries entering the US. We know that LGBTQ peoples safety and rights are deeply connected to the safety and rights of all immigrant communities in New York City and we must stand together during this difficult times."

Sonia Guiñansaca, operations manager at Culture Strike, said: "Artists across the country are demanding the reverse of the executive order. This attack on refugee and Muslim communities impacts our most vulnerable communities and spreads a culture of terror and fear. We urge fellow artists, culture makers and art institutions to continue to put pressure and help end the unjust targeting and separation of families."
Amaha Kassa, Executive Director, African Communities Together, said: "The Muslim ban and the refugee freeze are inhumane, unconstitutional disasters. African immigrants and refugees have been hit hard by the executive orders, and we will keep hitting back hard to reverse them."
Tara Raghuveer, NPNA Deputy Director, said: "Yesterday was a powerful victory. Regardless of where they come from - whether as a refugee or as an undocumented young person - everyone deserves to live with dignity, protected from harm. We oppose Trump's unjust, un-American, and discriminatory steps to disgrace our history, beliefs, and values. We will resist Trump's actions until justice is served."