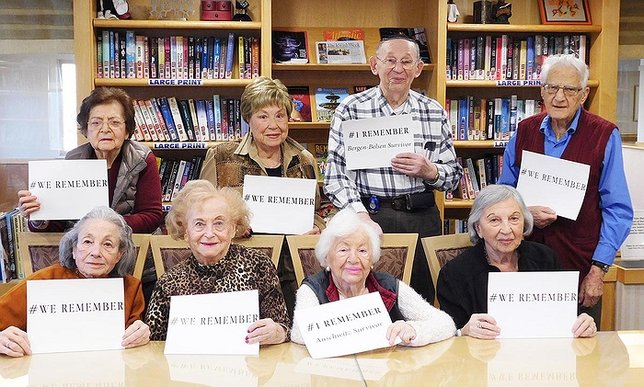 Commack, NY - January 29, 2019 - Seven decades have passed since the end of the Holocaust, yet for the survivors, the horrors they witnessed remain vividly clear. On the 74th anniversary of the liberation of Auschwitz-Birkenau death camp in Poland, Holocaust survivors now living at Gurwin Jewish Fay J. Lindner Residences assisted living community in Commack participated in the third annual “WeRemember” campaign to ensure the world never forgets the atrocities committed against humanity.
Organized by the World Jewish Congress (WJC), the #WeRemember social media movement was created three years ago to combat anti-Semitism and all forms of hatred, genocide and xenophobia. The initiative is considered to be the largest global event ever organized to commemorate the Holocaust.
Survivors, family and friends, celebrities and world leaders representing a wide range of faiths were among the thousands of people from around the world who posted photos of themselves displaying “#WeRemember” signs on Facebook and Twitter. Photos were shared by WJC and then live-streamed on a jumbotron at the gates of Auschwitz, where more than one million people were murdered by the Nazis.
Eight Holocaust survivors from Gurwin’s assisted living community as well as members of Gurwin’s administrative staff participated in this year’s social media movement. Among them were survivors of Bergen-Belsen, Auschwitz and other concentration camps, “Hidden Children” and Kindertransport refugees, each with a unique, horrific story to tell. Recognizing the campaign’s powerful impact and its global reach through social media outlets, the survivors were eager to participate, holding signs and giving testimony to their own personal experience during the Holocaust, because, according Kindertransport child Ruth Meador, “the whole world needs to know…and care.”