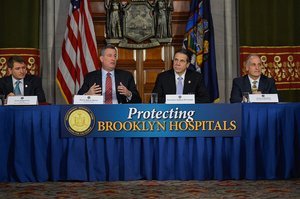 On Monday Governor Cuomo, Mayor Bill de Blasio, and several New York State legislators came together to demand the federal government approve a $10 billion Medicaid waiver which was introduced in 2012. Cuomo readdressed the issue last week in his Executive Budget address after the State received a letter from the U.S. Department of Health and Human Services saying they failed to approve the waiver’s application. The waiver would be critical in allowing the State to reinvest Medicaid savings and focus the money on primary and preventative care, and minimizing unnecessary hospital admission.
“For 18 months, New Yorkers have been waiting on the federal government for one clear statement: your $10 billion Medicaid waiver is approved,” Governor Cuomo said. “While other states were given approval in just a few months, New York is still waiting and hospitals in Brooklyn will close if we wait any longer. This is an issue Mayor de Blasio brought into focus during his campaign and I am pleased to have him join us and the Brooklyn delegation in the fight to save our hospitals.”
While the waiver has been in limbo since 2012, New York State has supported Brooklyn’s murky healthcare delivery system for more than a year. The waiver’s approval is said to be critical in transforming health care in the City.
“We are doing everything in our power to protect health care in neighborhoods across New York City, but we need the federal government to help,” Mayor de Blasio says. “The billions of dollars rightly sought by Governor Cuomo would jumpstart the transformation of our safety-net hospitals, and bring them into the 21st century. New York City stands with Governor Cuomo and State Legislators in urging our federal partner to make this critical investment to protect community health care.”
Since Cuomo has been in office his Medicaid Redesign Team has added 500,000 people and saved $34 billion in New York’s Medicaid system.
The waiver’s focal point of minimizing unnecessary hospital admission is said to be key in helping various hospitals around the State save money. One hospital in a constant state of disarray due to financial issues is the Long Island College Hospital in Brooklyn. It seems every few months SUNY Downstate will attempt to close the hospital while the outrage of activists and community leaders revive it.
While campaigning for office, Mayor de Blasio was arrested during a demonstration to keep the hospital open.
[Source: Governor Cuomo]