Brooks: "Volunteer Firefighters and EMTs go above and beyond to protect their community and answer their neighbors’ calls for help 24 hours a day, 7 days a week." 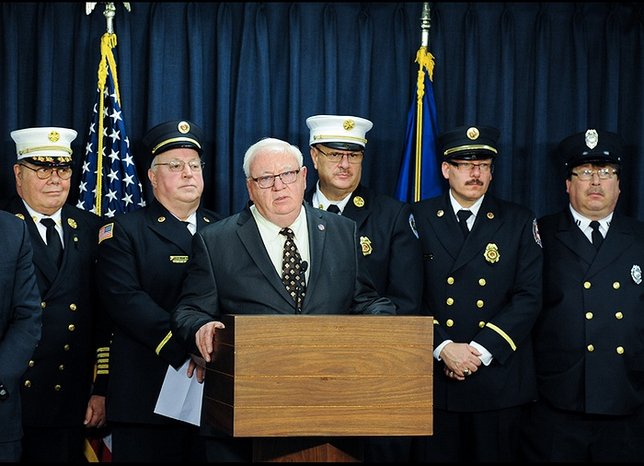 State Senator John E. Brooks joined representatives from the State’s fire service organizations in Albany on January 22 to call on the Legislature to support a bill that would alleviate an affordability crisis affecting fire departments across New York State.

Long Island, NY - January 26, 2017 - State Senator John E. Brooks joined representatives from New York State’s largest fire service organizations and the New York Conference of Mayors and Municipal Officials in Albany on January 22 to call on the Legislature to support a bill that would alleviate an affordability crisis impacting fire departments across New York State. Providing emergency medical services (EMS) can place a severe strain on fire departments. Currently, fire departments are the only EMS providers in New York State prohibited from recovering any of the associated costs.
“Volunteer Firefighters and EMTs go above and beyond to protect their community and answer their neighbors’ calls for help 24 hours a day, 7 days a week,” said Senator Brooks.  “It seems like a no-brainer that we should allow fire ambulance services to bill insurance companies for associated costs in emergency situations, and alleviate the financial burden from fire departments and individuals in need of help.”
To rectify this looming danger, Senator Brooks is a sponsor of legislation (S363A/A7717A) that allows fire departments to recover the costs of responding to EMS calls without raising any taxes. Allowing fire departments to recover costs as well would ensure that the local fire departments’ ambulances could continue to operate and provide their communities with this vital service.
Much of the ambulance coverage on Long Island and New York State is provided by fire departments, often very small organizations and typically staffed by volunteers. These fire companies are responding to an ever-increasing volume of medical calls, with many fire departments handling more EMS calls than fire responses. As providing ambulance services is very expensive, with the costs of equipment, personnel, training and more, many fire departments have reached a point financially where they will no longer be able to provide the life-saving service for their communities.
Brooks concluded, “We must continue to ensure that all residents have access to fire and ambulance services in emergency situations, and I urge all of my colleagues to join me in supporting this crucial legislation.”
For more than 45 years, John E. Brooks has been an active volunteer firefighter with the Seaford, Medford and Lindenhurst Fire Departments, previously serving as Seaford's Chief of Department. Prior to Superstorm Sandy, Senator Brooks was the Chairman of the Long Island Hurricane Symposium Programs where he worked hand-in-hand with hurricane experts and the National Weather Services to evaluate risk on Long Island.
Senator Brooks is the New York State Senator for the 8th District, representing portions of Nassau and Suffolk Counties along the South Shore of Long Island.