The Third Squad reports the arrests of two Westbury men for Robbery that occurred on Monday, February 25, 2016 at 2:20 pm in Westbury. 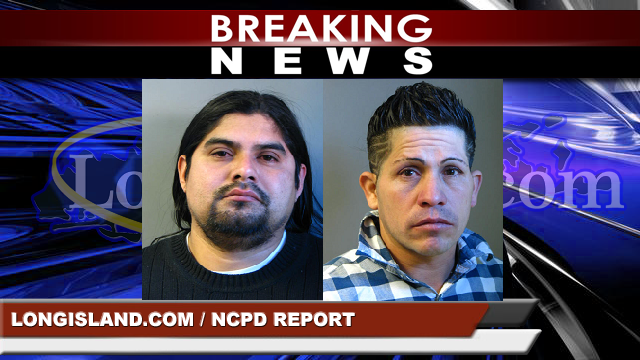 (left) Miguel A.Amador, 32, and (right) Ovidio Hernandez, 33, both from Westbury, were arrested for the indicated crime.

According to detectives, a verbal argument ensued between a 32 year old male victim and the defendant Ovidio Hernandez, 33, of Westbury, while inside the Sabor Latino Restaurant located at 678 Union Avenue. Hernandez then struck the victim in the forehead with a beer bottle causing a large laceration that made him fall to the ground. At that time Co - defendant Miguel A. Amador, 32, of Westbury, hit another 30 year old male victim that came to the aid of first victim by using a pool stick causing contusions to the victim’s right hand.  Ovidio Hernandez then displayed a folding knife and removed an undetermined amount of US currency from the 32 year old victim’s pocket. Both defendants then fled out the rear door of the restaurant. Third Precinct Police responded and after hearing a police broadcast they observed the two defendants in the rear lot and placed both defendants into police custody without incident. The 32 year old victim was transported by ambulance and treated for his injuries. Other victim refused treatment at the scene.