In a press conference at 2 PM today, Governor Andrew Cuomo has declared a State of Emergency for Long Island. 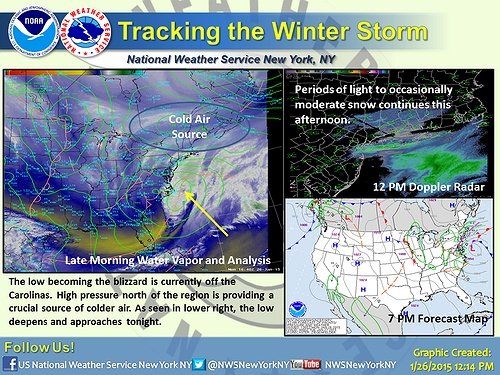 Photo by: The National Weather Service

Update: The Governor has issued a Travel Ban for both Suffolk & Nassau Counties, as well as New York City. The ban will go into effect at 11 PM tonight, and stay in effect until further notice.

As per the Governor's Executive Order, only authorized emergency vehicles will be permitted on closed roads, and violators will be subject to a fine of up to $300, and could be arrested on Misdemeanor Charges. Please be sure to check back for updates.
At 2 PM this afternoon, Governor Andrew Cuomo declared a State of Emergency for Long Island, New York City, and the Hudson Valley, banning tractor trailers on select roadways beginning at 4 PM. The State is also considering a full travel ban on roads and bridges on Long Island and in NYC, and has dispatched 359 snow plows to Long Island to help local municipalities handle the snow. Additionally, hundreds of members of the National Guard will be dispatched to the area, along with additional snow removal equipment.

“As New York State prepares for a major snowstorm, I am declaring a State of Emergency to ensure local governments have the tools and resources they need to respond quickly and effectively,” Governor Cuomo said in a statement earlier today. “With forecasts showing a potentially historic blizzard for Long Island, New York City, and parts of the Hudson Valley, we are preparing for the worst and I urge all New Yorkers to do the same – take this storm seriously and put safety first. If leaving work early is an option, I urge residents in downstate communities to do so and stay off roads and our public transit networks as we brace for the storm’s impact.”
In Suffolk County, County Executive Steve Bellone has declared a State of Emergency, stating that enacting the State of Emergency "will allow us to do what is necessary to protect the health, safety and welfare of the people and property of Suffolk County."
In a press conference earlier this afternoon, Mayor Bill de Blasio announced that at 11 PM this evening, train service would be suspended, and that throughout the boroughs, cars must be off the roads in order to allow sanitation trucks to clear the roadways of snow safely and efficiently. He also announced a postponement of the regents, as well as school closures citywide tomorrow, stating "This will most likely be one of the largest blizzards in the history of New York City."
In order to help Long Islanders get home safely, we've put together a Travel & Transit Update with the latest info on Transit Delays, Road Closures, and more:
The Long Island Rail Road
Between 2 PM and 4 PM this afternoon, Long Island Rail Road will have 8 additional trains leaving Penn Station, before service is suspended at 11 PM this evening.
Babylon Branch
Port Jefferson Branch
Port Washington Branch to Great Neck

Traffic & Road Closures
Governor Cuomo has announced a Travel Ban on all State & Local Roads for both Nassau & Suffolk County. The ban will begin at 11 PM tonight, and will be in effect until further notice. As per the Governor's Executive Order, only authorized emergency vehicles will be permitted on closed roads, and violators will be subject to a fine of up to $300, and could be arrested on Misdemeanor Charges.

School Closings
Across Long Island, numerous school closures have been announced. Be sure to check our Long Island School Closures Page for the latest updates on your local district closings.