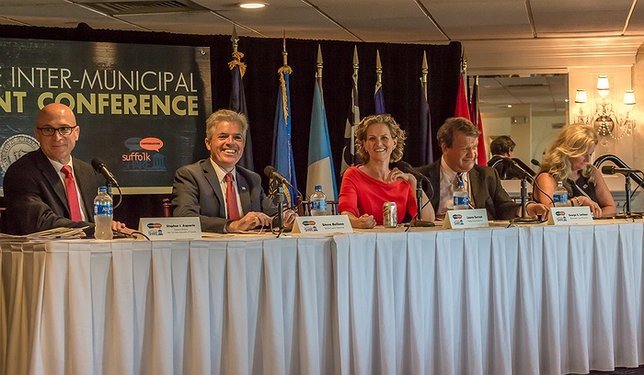 Mineola, NY - January 25, 2019 - Nassau County Executive Laura Curran and Suffolk County Executive Steve Bellone today announced that former Congressman Steve Israel will lead a bi-county working group to help coordinate a regional response to the recurring federal government shutdowns and their impact on Long Island.
County Executive Curran also today announced that the Nassau County Veteran Services Agency will open its food pantry (“Vet Mart”) to serve unpaid and furloughed air traffic controllers in Westbury and other impacted federal workers, many of whom now have missed multiple paychecks since the federal government shutdown began 35 days ago.
“The President’s shutdown is spiraling out of control. Flights are being halted because of safety concerns, while countless federal workers on LI are struggling to put food on the table for their families,” said County Executive Curran. “We are acting in every way we can to respond to this shutdown, including today announcing a food program to support our air traffic controllers and other federal workers going without pay. To President Trump: Enough is enough already – open the government now!”
"There's a lot of finger pointing over the federal government shutdown. County Executives Bellone and Curran, on the other hand, have decided to roll up their sleeves and protect their constituents. I'm honored to volunteer to assist them,” said former Congressman Steve Israel.
“During this difficult time the Nassau County Veterans Service Agency would like to extend its food pantry services to all Federal Employee, said Ralph Esposito, Director of Nassau County Veteran Services Agency. “Many Federal Employees have been working for weeks during the shutdown without pay and we wish to assist these hardworking Americans with free weekly groceries.”
It has been 35 days since the federal government shut down, and hundreds of federal workers across Long Island have now missed multiple paychecks. Long Island is home to 16,000 federal jobs, while 26,000 federal workers live on Long Island. Nationwide, 800,000 federal employees are going without a paycheck. It is estimated that the Long Island’s economy could be losing as much as $28 million per week in lost wages to federal employees, according to the Long Island Association. Today, the FAA was forced to halt flights in La Guardia International Airport and at airports in Newark and Philadelphia because of air traffic controller shortages.
In Nassau County, the Federal Aviation Administration (FAA) operates the Terminal Radar Approach Control (TRACON) center in Westbury, NY. As of last week, there are roughly 265 federal workers stationed at TRACON. Roughly 190 are working without pay, while roughly 75 have been furloughed.
County Executive Curran has today announced a food program to support the air traffic controllers and other furloughed and unpaid federal workers in Nassau County. The Nassau County Veteran Services Agency will open its food pantry (“Vet Mart”) to serve these federal employees and their families in Nassau County. Workers need only show their employment identification upon arrival to the “Vet Mart,” located at 2201 Hempstead Turnpike Building Q, East Meadow, NY 11554. Hours of operation are M-F 9:00AM-12:00PM.
Safety trainings for air traffic controllers have been suspended and new hiring has been frozen, exacerbating existing staffing issues. According to the presidents of the Air Line Pilots Association and of the Association of Flight Attendants, “staffing in our air traffic control facilities is already at a 30-year low and controllers are only able to maintain the system’s efficiency and capacity by working overtime.”
They also warned that almost 20% of certified professional controllers were eligible to retire, and if they chose to do so, “the National Airspace System will be crippled.”
County Executive Curran would like to thank the American Legion, VFWs, LI Cares and Island Harvest, all of whom donate food to the Nassau County Veterans Service Agency’s Vet Mart. The County Executive has joined elected officials and community leaders in supporting local food drives across Nassau County by LI Cares and Island Harvest for federal employees affected by the shutdown.
Information about SNAP benefits and updates on the federal shutdown’s impact on the program can be found here.