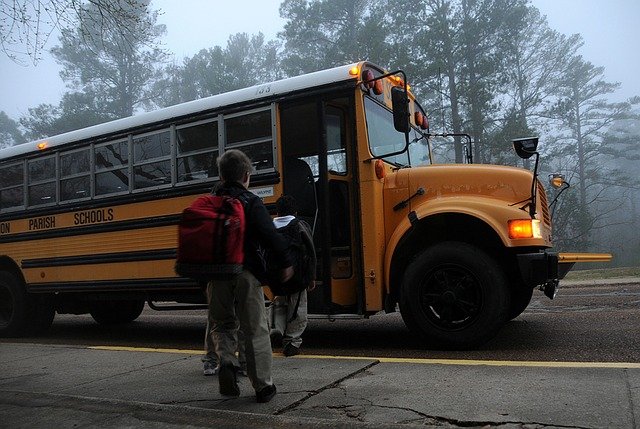 New York, NY - January 23, 2019 - Governor Andrew M. Cuomo today announced new proposals in his fiscal year 2020 Executive Budget to bolster student safety on school buses. The Governor's comprehensive proposal would authorize school districts to install stop-arm cameras on school buses, increase the fine for passing a stopped school bus and require students to wear seatbelts on school buses. These proposals build on the Governor's stated plans of ensuring student safety and modernizing school safety laws.
"The safety of New York's schoolchildren is our top priority and reckless drivers who put our kids in danger must be held accountable," Governor Cuomo said. "Motorists have a responsibility to pay attention and abide by the law, especially when driving in the vicinity of school buses, and these measures will ensure students make it to and from school safely and help prevent needless tragedies."
In New York, approximately 1.5 million students ride school buses to and from school every year. Although it is illegal to pass a stopped school bus, on Operation Safe Stop in April 2018 - a day in which law enforcement target citations for passing a stopped school bus - over 850 people ignored the law and were ticketed. Extrapolated for 180 days of school, someone passes a stopped school bus 150,000 times a year, endangering the safety of school children.
To ensure students are safe on their way to and from school, the Governor is proposing authorizing school districts to install stop-arm cameras, which would document and record illegal passing of the school bus, and issue a resulting ticket in order to stop this behavior for good. As an added deterrent, the proposal would increase the fine for passing a stopped school bus to further increase student safety. In addition, the Governor has put forth a proposal that would require students to wear seatbelts on school buses.
Building on student safety reforms proposed in the FY 2020 Executive Budget, Governor Cuomo recently announced a proposal to formally reinstate the speed camera program in New York City and more than double the number of zones in which the cameras would be installed from 140 to 290. Speed cameras are a proven method to not only reduce car crashes, but improve the survivability rates in school zones. After the Republican-led Senate blocked passage of legislation that would have allowed the program to continue in 2018, Governor Cuomo declared a State of Emergency as a temporary means of reinstating the program.
In 2016, Governor Cuomo modernized the school safety laws to increase student safety. The updated laws required school districts to designate a point of contact in case of emergency, increase training requirements for faculty and staff and update safety drills to include a lock down event.