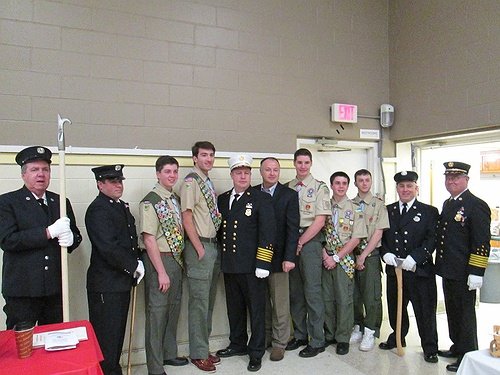 Smithtown, NY - January 23, 2015 - Suffolk County Legislator Robert Trotta, NYS Assemblyman Michael Fitzpatrick, a representative for NYS Senator John Flanagan, Nissequogue Mayor Richard Smith, members of the St. James Fire Department and other guests attended the Eagle Court of Honor for five members of Boy Scout Troop 301 of St. James.
For his Eagle Scout project, Harrison Donahue constructed a wood framed kiosk at Short Beach in Nissequogue, which contains information on wild life safety, especially for Horseshoe Crabs. He hopes this project will create a greater respect for the ecosystem and help to protect various endangered species.
Joshua Gavorsky’s Eagle Scout project was done at the Smithtown Historical Society where he built a picket fence around the Society’s vegetable garden. He painted the fence white and enlisted the public’s help to decorate the fence during an event at the Historical Society.
The Saint James Fire Department 9-11 Memorial was the site for Gregory Becker’s Eagle Scout project.  He landscaped the areas around the 9-11 Memorial with perennials and he purchased granite benches to provide a sitting area for visitors. He also donated his unused funds for the project to the fire department’s 9-11 Memorial Fund.
Thomas Beirne and Christopher Beirne did their respective Eagle Scout projects to benefit the animals at the Smithtown Historical Society. Thomas extended and increased the size of a paddock around a barn at the Historical Society. His project provided more space for the animals to move from the barn stalls to the paddock.  Christopher’s project extended the chicken coop to include an enclosed “free range” area where they could roam freely and be protected from predators. He included a gate so that handlers could enter without the chickens escaping.
Suffolk County Legislator Trotta said, “This is a very proud moment for these young men and their families, as well as their troop leaders and fellow scouts. I extend my congratulations to all of them for being outstanding scouts, students, athletes and role models for their peers and hope that they will remain active in their respective communities.”