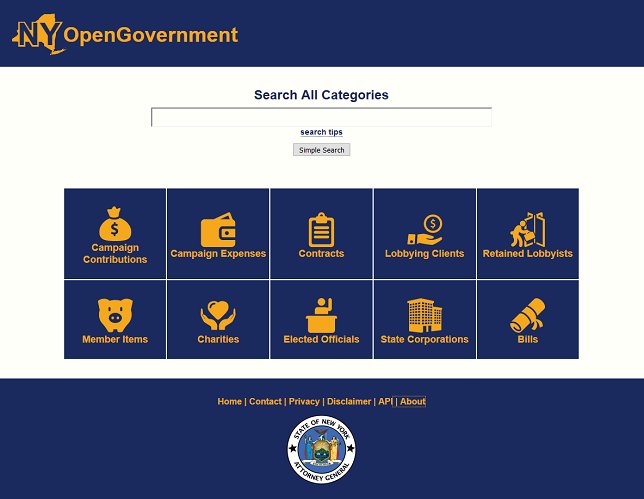 For the first time, the public and the press can link lobbyists to specific legislation; interactive data allows for better public interaction adn increased transparency.

New York, NY - January 21, 2016 - Attorney General Eric T. Schneiderman announced today a re-launch of his office’s online public data portal, NYOpenGovernment.com. For the first time, lobbying disclosures collected by the Joint Commission on Public Ethics (JCOPE) can be matched to specific bills proposed and passed in the New York State legislature. Users will be able to track more easily what issues lobbyists and their clients are advocating, and how they result in specific legislation. Furthermore, users will be able to “click through” pages of the data, allowing them to connect the business of a particular donor to the political contributions made to a candidate’s campaign.

“Our new open government website is an important step in my office’s efforts to improve transparency and accountability in government,” said Attorney General Schneiderman. “In an effort to make government more responsive, these new tools will give the public easy access to data that is typically difficult to navigate and piece together. I look forward to seeing the outside analysis that results from this data, and pledge to continue our efforts in this area.”

NYOpenGovernment.com is an effort by the Attorney General’s office to promote the public’s right to know and monitor governmental decision-making. It is the only statewide resource that aggregates a range of sources for state government information – including data on campaign finance, lobbying, charities, state contracts, member items, corporate registrations, elected officials, and legislation – which is otherwise scattered or difficult to retrieve. Users will also be able to request access to the site’s API, which was debuted during last year’s Sunshine Week. The API will allow developers to build new graphical interfaces, devise algorithms for mining the data in innovative ways, create applications that join the Open Government information with other publicly available data, and explore a host of other potentially useful approaches.

“We are pleased that New York State Attorney General Eric Schneiderman has continued to provide the public a greater level of access to a range of important data through NYOpenGovernment.com,” said Dick Dadey, Executive Director of Citizens Union. “Their responsiveness to the public’s suggestions has produced a site that is more user-friendly and illustrates the kind of commitment to government transparency and civic collaboration that we applaud.”

"More isn't always better but when it comes to transparency in government there can never be enough, and more often than not there's too little. The Attorney General's ongoing efforts to give New Yorkers access to their government should be a model for other elected officials. Common Cause/NY looks forward to getting online and using this new resource," said Susan Lerner, Executive Director of Common Cause/NY.

"New York Open Government is one of our state's most important government transparency websites. We — and many other watchdog groups and journalists — appreciate Attorney General Schneiderman's efforts to keep improving it and ensuring its wealth of data is high quality and easy to use," said Dominic Mauro, Staff Attorney of Reinvent Albany.

"The NYS and NYC League congratulates Office of the New York State Attorney General on the roll out of web site for NY Open Government! The goal and mission of the League for 96 years has been to promote informed and active participation in government and this web site is a great tool for every New Yorker," said The NYS and NYC League of Women Voters.

“This project is a wonderful example of how CUSP combines training in urban informatics with direct impact to improve government and improve social good,” said Steve Koonin, Director of NYU’s Center for Urban Science & Progress.

This initiative is being led for the Attorney General's Office by Director of Research & Analytics Lacey Keller, Data Scientist Meredith McCarron (former CUSP student), Data Scientist Jonathan Werberg, Manager of Information Sciences 1 (MIS-1) Michael Bullock, and Information Technology Specialist 3 (ITS-3) Namita Mishra. A portion of the redesign to NYOpenGovernment.com was completed as a Capstone project by students at CUSP. We would like to thank the Capstone team at CUSP, Brigitte Jellinek, Anjali Mehta, and Ady Sevy, for prototyping expanded functionality for New York Open Government.