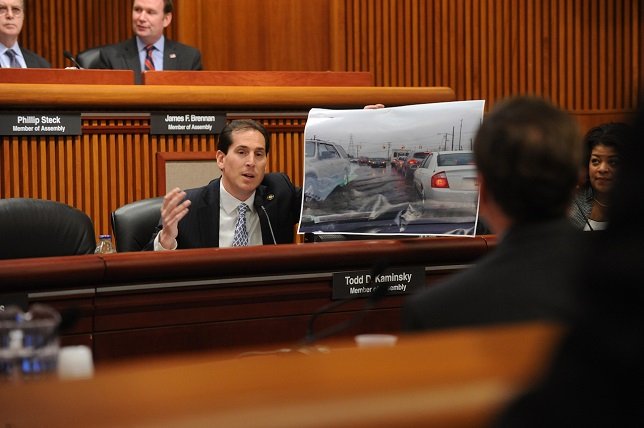 Kaminsky at New York State Legislative Transportation Hearing on January 20, 2016 showing the extreme flooding that occurs on NY 878 during a normal rainstorm.

“The number one complaint I have received in office so far involves the congestion and flooding on NY 878,” said Assemblyman Todd Kaminsky. “NY 878 is an emergency evacuation route. The inability of government to fix the problems that have plagued this road represents a colossal government failure. I ask NYSDOT to review past improvement plans and make the congestion and flooding a priority during this budget.” 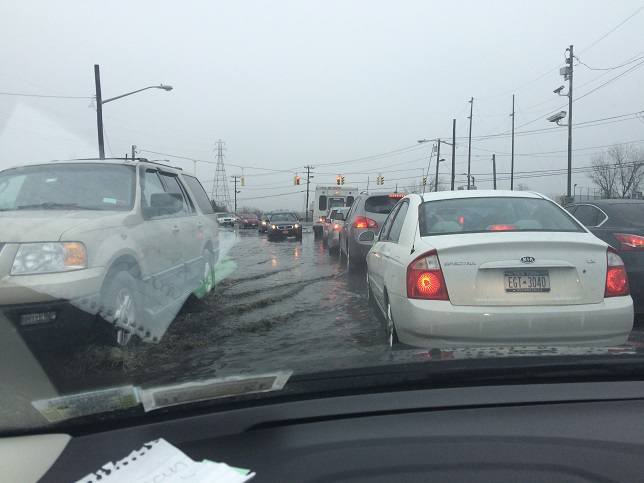 Extreme flooding that occurs on NY 878.

Approximately 40,000 vehicles travel along NY 878 daily, making it a major artery of transportation in the South Shore and Queens.  In addition to connecting drivers to New York’s largest airport, John F. Kennedy, and to New York City, NY 878 also serves as a designated evacuation route for ambulances, fire vehicles, police cars, and South Shore and Queens residents ordered to evacuate in the event of flooding or other natural disasters.  NY 878 is one of only three points of evacuation for tens of thousands of residents on the Rockaway Peninsula and Long Beach Barrier Island and was heavily utilized during superstorm Sandy to evacuate people and bring in goods during that emergency.  Yet, NY 878 is in constant disrepair—large potholes and traffic plague the roadway on a daily basis, making it the point of extreme frustration for commuters and residents.  While the repaving project recently undertaken between Burnside Avenue and Rockaway Turnpike certainly created improvements for riders, more work must be done to make this road safe and easy to travel.

The Assemblyman brought the attached photo to the hearing to demonstrate the extreme flooding that occurs on NY 878 during a normal rainstorm.