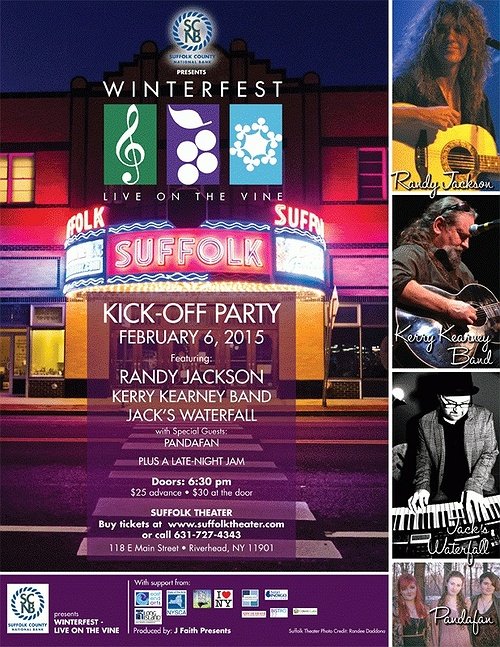 Riverhead, NY - January 22, 2015 - The 8th Annual Winterfest - Live on the Vine, presented by Suffolk County National Bank, will host its kickoff at the enchanting Suffolk Theater on Friday, February 6, 2015, starting at 6:30 PM. This party will kickoff the award-winning music festival, which will be held February 21 through March 29, 2015.

Come celebrate Long Island’s great musical talent, wine, food and friends in high style! You’ll be transported back in time to an age of splendor the moment you step foot in the completely restored 1933 art deco theater. Join us for some of the best music east of NYC! Featured performers include: RANDY JACKSON, KERRY KEARNEY BAND, JACK'S WATERFALL, and PANDAFAN, plus a late night all-star jam!

All press are invited to attend the Winterfest Kick-off Party. RSVP by Email.

More about Winterfest - Live on the Vine

Winterfest - Live on the Vine is a six-week mid-winter music festival that takes place in Long Island’s unique vineyard tasting rooms, boutique hotels, craft breweries, historic theaters and other inspired venues on the East End. Over 50 emerging artists, as well as a diverse lineup of national headliners will perform, including: the legendary Roomful of Blues, Jazz guitarist Stanley Jordan, rockers the Smithereens, Paul Simon Bassist Bakithi Kumalo with an All Star Band and many more. Dozens of cultural attractions and special offers on hotel and B&B’s, getaway packages, restaurants and winery tours will also be offered. The 8th Annual Winterfest - Live on the Vine is presented by Suffolk County National Bank, and runs from February 21 through March 29, 2015. Previously known as “Jazz on the Vine”, the musical offerings expanded in 2014 to include blues, soul and country music in addition to jazz, hence the title change. Winterfest is a project of East End Arts, The Long Island Wine Council, and Long Island Convention & Visitors Bureau, with support from Suffolk County under the auspices of the Office of Film & Cultural Affairs.