Councilman Mark Cuthbertson, inducted 24 new student members and welcomed back 10 returning members of the Huntington Youth Court in a ceremony. 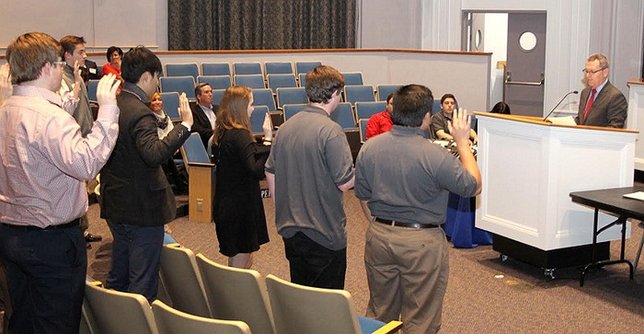 “It is vital to instill the legal ramifications to first time youth offenders in such a unique criminal justice arena,” stated Councilman Mark Cuthbertson.  “I would like to personally thank and commend Maria Georgiou, Maria Danisi and staff on behalf of the Youth Court’s Seventeenth Anniversary and I look forward to the continued success of this wonderful program,” added Cuthbertson.

The Youth Court Program, initiated by Councilman Cuthbertson in 2000, is aimed at holding youth accountable for misconduct and preventing teen violence, while at the same time providing an educational experience about the legal process.  The program’s coordinator, Maria Danisi, works with high school volunteers who serve in a simulated courtroom proceeding to determine sentencing for first-time, non-violent offenders.  Members rotate in groups of 20 and perform as defending and prosecuting attorney, judge, bailiff and jury.

An average Youth Court participant will hear cases on low-level misdemeanors such as shoplifting or vandalism.  The offender has already pleaded guilty to the crime and has agreed to be judged by a jury of his/her peers.  The jury may impose a sentence that includes community service, a written or verbal apology to the victim, written essays pertaining to the crime, counseling sessions, a jail tour, mandatory participation in a peer discussion group and mandatory jury duty.

“Since the program’s inception, our Youth Court volunteers have heard 378 cases and they have handed out an average of 100 sanctions to youth offenders each school year – with a combined total of more than 400 volunteer hours for trials alone per year,” remarked Mr. Cuthbertson.

For more information or if you are interested in joining the program, please contact Maria Danisi at (631) 271-5547 or via e-mail.