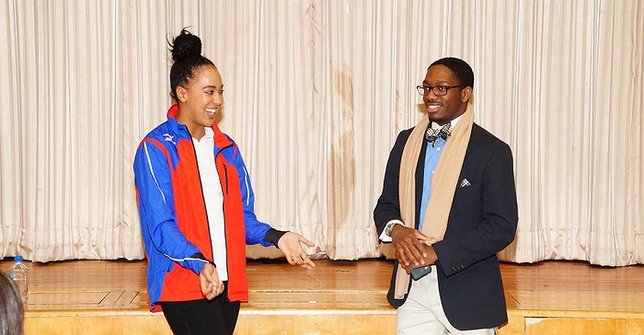 (L-R) Olympic Haitian Swimmer Naomy Grand'Pierre answers a Uniondale High School student’s questions about what it takes to become an Olympic swimmer. She was visiting the school as part of a Haitian Club initiative to support victims of Hurricane Matthew.

Uniondale, NY - January 18, 2017 - The Uniondale School District recently organized an opportunity for students to meet Haitian Olympic Swimmer Naomy Grand’Pierre, the first female swimmer from Haiti to compete in the Olympics. More than 200 Uniondale High School students came together to listen to the featured guest share her inspirational experiences of overcoming obstacles to qualify for the Olympics. Following the assembly, 50 Uniondale High School swimmers met individually with Naomy to learn what it takes to become one of the best swimmers in the world.

Naomy Grand'Pierre shares her inspirational experiences as the first female swimmer from Haiti to compete in the Olympics with Uniondale High School students. Photo by Uniondale School District.

The visit was part of the District’s fundraiser to help support victims of Hurricane Matthew, which devastated a number of areas throughout Haiti in 2010. The event provided a platform for Haitian students whose families experienced the hurricane to share their firsthand memories. In addition, Uniondale High School Assistant Principal Dyan Barton was also honored for her work with Haitian students and their families over the last 10 years.

For more information about the Uniondale School District please visit the website at www.district.uniondaleschools.org.