A man hit six different cars before being arrested. 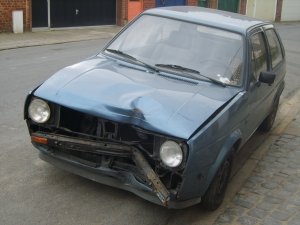 According to officers, 911 began receiving calls for a vehicle that had been involved in numerous auto accidents with parked vehicles and a moving vehicle on Hempstead Turnpike in Franklin Square. The operator, Leonard Dunne, 47, of 644 Pauley Drive, who was the sole occupant and driver of his vehicle, a 2001 Dodge Dakota, continued on failing to stop and report the incidents. Dunne, who turned off of Hempstead Turnpike, was now traveling southbound on Nassau Boulevard striking several more parked vehicles and ended up on the front lawn of a residence near the intersection of Nassau Boulevard and Roosevelt Avenue. Upon police arrival it was determined that Dunne was in an intoxicated condition, was placed into custody and transported by ambulance to an area hospital where he was admitted for a broken nose and facial lacerations.
Dunne, who was involved in six reported accidents was the only person requiring medical attention.
Dunne is charged with Criminal Possession of a Controlled Substance 7th Degree, Driving While Ability Impaired Drugs, two (2) counts of Leaving the Scene of an Incident Without Reporting, Unlicensed Operation of a Motor Vehicle, Uninspected Motor Vehicle, Unregistered Motor Vehicle, and Uninsured Motor Vehicle.
He will be arraigned as soon as medically practical.