The Hemlock Woolly Adelgid (HWA), is a non-native, invasive aphid-like insect that infests Eastern Hemlocks throughout New York State, and across most of the eastern US. 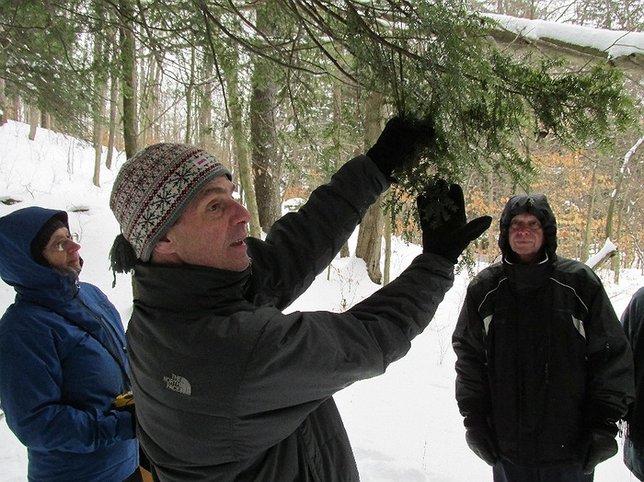 Albany, NY - January 10, 2017 - The winter is a great time to visit State Parks in New York. Even in these colder months, opportunities for recreation are abundant and each year State Parks welcomes cross-country skiers, snowshoers, and hikers, who enthusiastically explore the many miles of trail that are open and maintained for winter activities.

Many recreationists are as eager to hit the trails in the winter as in the warmer months, but most are likely not aware that by enjoying their favorite winter past-time, they are also able to aid State Parks Biologists and staff in detecting an insidious invasive pest.

The Hemlock Woolly Adelgid (HWA), is a non-native, invasive aphid-like insect that infests Eastern Hemlocks throughout New York State, and across most of the eastern US. The insect attacks the tree by attaching to the underside of the branch at the base of the needles, and feeding on the sap. The tree will respond by shutting down resources to the damaged areas. Eventually, as the infestation spreads, the tree dies – the insects having essentially sucked the life out of it.

Currently, work is being done throughout NY State to try to slow the spread of this pest. However, in order to combat HWA, researchers first need to know where it has (and hasn’t) been found. This creates an opportunity for concerned and conservation-minded citizens to provide a great service to the parks they love, and to help to protect the natural beauty that they cherish.

Hemlocks, one of many coniferous (cone-bearing) species throughout New York State, can best be identified by their needles, which are flat, generally a little more than an inch long, and have two white lines running parallel on the underside. The winter months are the best time of year to check these trees for HWA. The insects, which lay eggs in the fall, coat the egg sacks with a white, woolly protective layer, which allows the developing young to survive the winter. This white “wool” also makes the egg sacks very visible throughout the winter months (mainly December-March), and allows observers, with little to no formal training, to detect the presence of HWA in hemlocks. 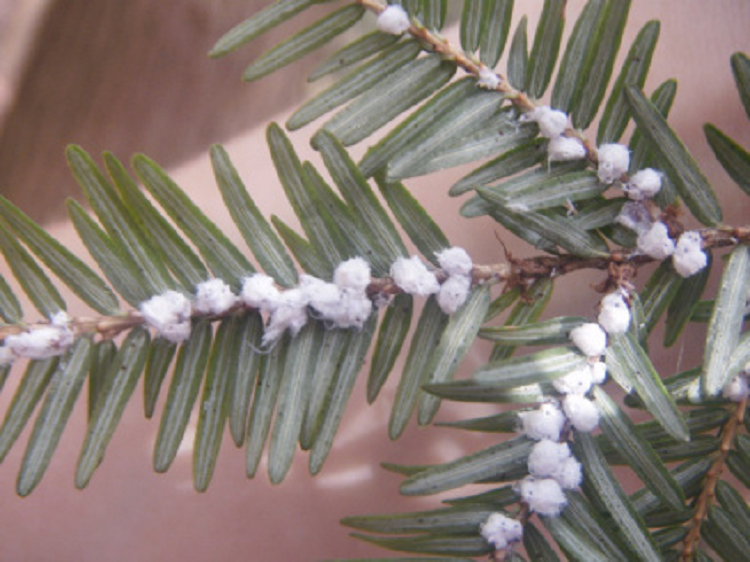 Pictured are HWA egg sacks on an Eastern Hemlock branch. Note the two white lines on the underside of the needles. Photo by Alyssa Reid, NYS Parks.

Checking for HWA is easy – simply flip a hemlock branch over, and scan the base of the needles for the presence of white, woolly, round egg-sacks. While some larger hemlocks have branches that are un-reachable, many of the smaller trees have overhanging branches that can easily be reached without leaving the trail. Take note of where you are, and anything that looks suspicious (many smart phones will even allow you to save your location), and let Parks staff know where you found HWA before you head home for the day.

So, as you head out on the trail this season, consider pausing from time-to-time to inspect a nearby hemlock branch or two. NY State’s hemlocks need our help, and you can play an important role in conservation, while enjoying the outdoors!

For more information, or to find out how to volunteer and learn more about HWA and invasive forest pests, contacts NYS Parks Invasive Species Staff: 845-256-0579.