Third Squad detectives are investigating a Robbery that occurred on Saturday, December 12, 2015 at 5:32 pm in East Hills. 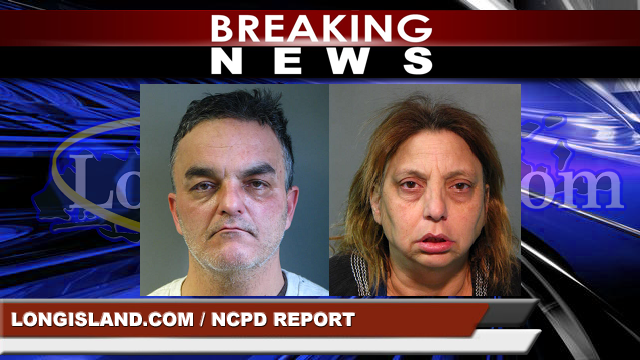 Police have arrested (left) Robert Gunsberg, 55, or Long Beach, and (right) Patricia Bertone, 52, of West Hempstead, in connection to the robbery and assault case of a 52-year-old woman in East Hill on December 12, 2015.

According to detectives, after returning home to her Peacock Drive residence from shopping, pulling into the driveway and unloading her packages, the 52 year old victim was approached by a male subject who grabbed her and demanded the jewelry she was wearing. After a continued struggle, the subject began punching her in the face at which time the victim gave the subject her rings. He then grabbed her pocketbook and fled the scene. The victim followed the subject and was observed entering a dark colored auto that left southbound on Peacock Drive.

During the altercation the victim sustained contusions and abrasions to her head and was transported to an area hospital for treatment. She further described the subject as being 5’8”-5’11” tall and wearing a dark colored hoodie.