The USA Luge doubles team of Matt Mortensen and Jayson Terdiman led four American sleds into the top 10 Saturday in a pair of Viessman World Cup races in Sigulda. 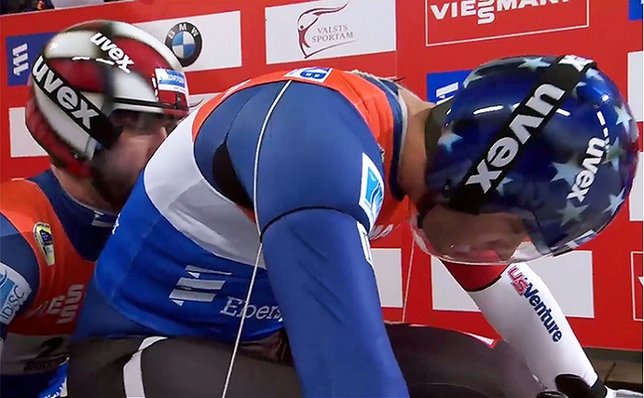 Mortensen/Terdiman led the way in 6th place, US women 7-8-9.

The Sochi Olympians were sixth, followed by three U.S. women as Summer Britcher took seventh, Erin Hamlin was eighth and Emily Sweeney followed in ninth place in the singles event.

“As for today's race, it was not our best sliding,” remarked Terdiman, of Berwick, Pa. “Probably our second and third worst runs of the week to be honest. It's awesome that we were able to finish in the top six with the mistakes that we made.

“We got a lot of help from the fact that Sigulda is a very difficult track for doubles. Today it took five victims, including the three-time Olympic medalist Sics brothers, that call this place home.  The super tight transitions make it difficult to maneuver if the sled gets even the slightest bit off line. Matt and I are going to try and forget today's runs for the sprint and team relay tomorrow with hopes for better lines and even better results. We know we have the speed it takes to get us where we want to be. It’ll just be a matter of performing.”

Mortensen and Terdiman, in their third season together, remain in fourth place in the overall World Cup standings, on the strength of two medals and consistent results thus far in the 2016-2017 World Cup season. Three German sleds precede them in the rankings, yet the USA duo is only 10 points from third place.

“I’m happy with today's result, especially with how Jayson and I slid,” said Mortensen, of Huntington Station, N.Y. “Our performance today on the sled was not nearly as good as it could have been, as training was a lot better. But I look forward to improving our runs tomorrow in the sprint race and team relay.”

As we approach the Winter Games in PyeongChang, just 13 months from now, the current women’s overall World Cup standings are eerily identical to the 2014 Olympic results – Geisenberger, Huefner, Hamlin and Canadian Alex Gough.

Germany dominated Saturday on an overcast, yet comfortable day in this region near the Baltic Sea that offered conditions that varied from the previous days of training.

Double Olympic medalist Natalie Geisenberger came from second place to overtake first run leader Tatyana Ivanova of Russia for the gold medal. Geisenberger’s individual run times of 41.675 and 41.810 were second best in each leg. The combined time of 1:23.485 was good enough for a 0.02 of a second triumph over teammate Tatjana Huefner, who improved from third to second. Ivanova settled for bronze in 1:23.616.

The turn of events replicated the 2011 World Championship race in Altenberg, Germany, where Ivanova had the halfway lead, only to see Geisenberger leave with the gold medal. Huefner, who has captured all three Olympic medals in a long career, is still waiting for her 38th World Cup victory which would make the 34-year-old the tour’s all-time leader. 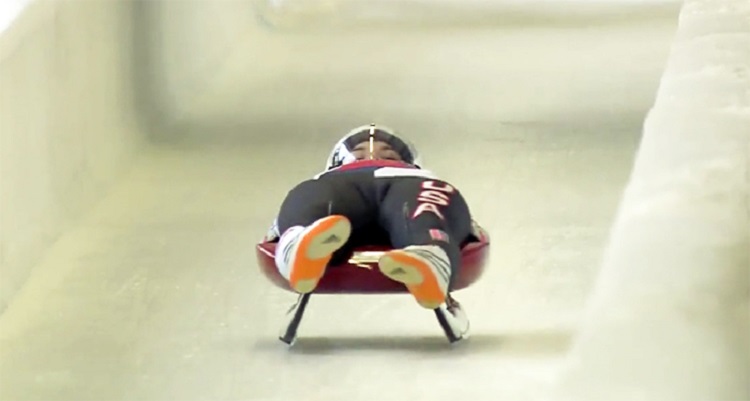 “While I had some minor mistakes in my runs, overall I was happy with the race,” commented the Glen Rock, Pa. athlete. “My two race runs were the best I've had all week, so I'm hoping to build on that on tomorrow's sprint race.” Britcher is ninth in the World Cup standings.

Toni Eggert and Sascha Benecken, of Germany, nailed down their sixth doubles victory in eight starts, and have distanced themselves from teammates Tobias Wendl and Tobias Arlt, who snapped a start strap in the second run and struggled into 10th place as a result.

Latvians Oskars Gudramovics and Peteris Kalnins were the silver medal winners in Sigulda for the second straight year. They recorded 1:23.476. Italy’s Ludwig Rieder and Patrick Rastner were the bronze medalists in 1:23.808, marking their second career finish on the World Cup podium.

The third German sled of Robin Geuke and David Gamm crashed and did not cross the finish line.

Justin Krewson, of Eastport, N.Y., and Andrew Sherk, of Fort Washington, Pa., finished 16th in 1:26.392, and sit in 16th place overall. Jake Hyrns, of Muskegon, Mich., and Anthony Espinoza, of Park City, Utah, did not qualify in Friday’s Nations Cup event and are 15th on the campaign

The two doubles units and Germaine, youthful as they are, continue to gain experience on European tracks.

The Sigulda program concludes with an action-packed schedule on Sunday. It begins with men’s singles at 2:20 AM EST, followed by the BMW Sprint World Cup and a Viessman Team Relay World Cup, presented by BMW.

There could be noticeable movement in the season-long standings after the sprint race, in which only the top 15 athletes from this weekend’s events will compete.

Meanwhile, the relay, with 13 teams, is the make-up race from the Whistler postponement. USA Luge has silver and bronze medals in the first two relays of the season, and is in second place just five World Cup points behind Canada.