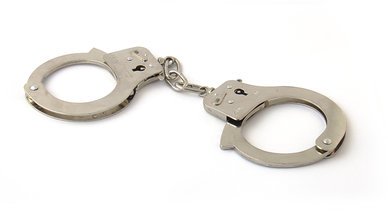 According to detectives, First Precinct police officers were conducting a narcotics investigation on North Jerusalem Avenue in East Meadow when they observed Anthony Castano, age 23 of 1040 Merrick Avenue Apt.1 in Merrick pull into a parking lot in a 1999 Infiniti. James Gauthier, age 45 of 2025 Bellmore Avenue Apt.1U in Bellmore then approached and entered the vehicle. After a brief conversation Gauthier exited the vehicle and began to walk away. Believing a drug transaction had occurred officers approached the vehicle instructing defendant Castano to shut off the engine and show his hands. A large clear plastic bag containing smaller clear bags with a substance believed to be crack cocaine was observed on Castano’s lap. The defendant refused the officers verbal commands and began to swallow the bags. As police attempted to remove Castano from the car he accelerated the vehicle striking an unmarked police car and fled at a high rate of speed westbound on North Jerusalem Road. The defendant’s vehicle then struck a utility pole at the intersection of Bellmore Avenue and North Jerusalem Road in Bellmore. Nassau County Police Emergency Services Unit, North Bellmore and East Meadow Fire Departments responded and extricated Castano. He was taken into custody and removed to an area hospital where he was admitted in stable condition. Defendant Gauthier was taken into custody at the original scene where he was found to be in possession of a bag containing a substance believed to be crack cocaine.

Gauthier was charged with Criminal Possession of a Controlled Substance 7th Degree. He was released on an Appearance Ticket and will appear at First District Court in Hempstead on Monday, February 3, 2014.