Bellone: "No one should have to live with a permanent mark on their body that reminds them of a violent and abusive time." 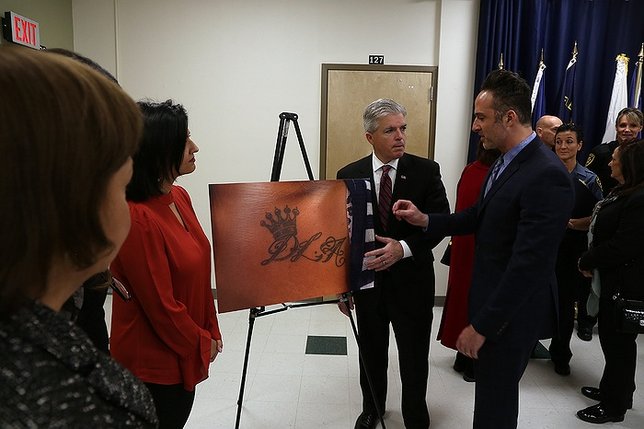 Suffolk Executive Bellone announced a partnership to help human and sex trafficking victims by offering tattoo removals at no cost.

Suffolk County, NY - January 14, 2019 - Suffolk County Executive Steve Bellone today joined with law enforcement officials and members of the Suffolk County Task Force to Prevent Family Violence to announce a partnership with Dr. Scott Blyer, a plastic surgeon with Cameo Surgical Center, to help facilitate the recovery of human and sex trafficking victims by offering tattoo removals, at no cost to the victim, to remove painful reminders of their past. The announcement took place on Friday, January 11, which is dedicated as National Human Trafficking Awareness Day.
“No one should have to live with a permanent mark on their body that reminds them of a violent and abusive time,” said Suffolk County Executive Bellone. “This new partnership brings us one step closer to helping victims of these heinous crimes recover and live a life with dignity.”
Suffolk County District Attorney Tim Sini said: “We can’t undo what has happened to survivors of human trafficking, but we will continue to connect them with victim advocates in my office and with the outstanding service organizations in Suffolk County. Now, with this new program, we can also try to erase the physical reminders of the horrific trauma they’ve endured. As law enforcement, we will continue to do everything in our power to arrest and prosecute traffickers to prevent further victimization. I’d like to thank County Executive Bellone; our law enforcement partners in the Suffolk County Police Department and Suffolk County Sheriff’s Office; the service agencies who work each and every day to provide assistance to survivors of trafficking and domestic violence; and of course Dr. Blyer for partnering with Suffolk County to offer this innovative and potentially life-saving new program.”
National Human Trafficking Awareness Day was implemented to raise awareness among Americans that human trafficking does not just happen in other countries, but in states and communities across the United States. Cases of human trafficking have been reported in all 50 U.S. States. It is estimated that between 20 to 30 million men, women and children around the world are victims of human trafficking. Trafficking affects all communities and people, regardless of race, class, education, gender, age, or citizenship.
Victims of human and sex trafficking are often times marked or branded with tattoos ranging from the name of the trafficker, their initials, a rose, or a crown, to symbolize a traffickers ownership over a victim. The removal of these tattoos assists survivors of human trafficking in the recovery process. Member agencies of the Suffolk County Task Force to Prevent Family Violence will provide Dr. Blyer’s practice with referrals of victims seeking to have their tattoos removed. Tattoo removals will be provided free of charge on a first come first serve basis.
The Suffolk County Task Force to Prevent Family Violence seeks to educate and protect victims, increase public awareness, and help to prevent family violence, including intimate partner violence and abuse and neglect of children, adults and elders, in Suffolk County. In 2017, this task force formed a Human trafficking committee, which has forged alliances with hospital networks and the SCPD Suffolk County Human Trafficking Unit to best understand the complex issue and advocate for the implementation of policies to serve the victims. Member advocacy agencies of the task force include, EAC Network, SEPA Mujer, Brighter Tomorrows, Crime Victims Center-Parents for Megan’s Law, The Retreat, Long Island Against Domestic Violence, Victims Information Bureau of Suffolk, and New Hour for Women and Children
In order to combat human trafficking in Suffolk County the Suffolk County Police Department launched a Human Trafficking Investigations Unit, the first of its kind on Long Island that has led to record levels of human trafficking and sex crimes arrests. The Suffolk County District Attorney’s office has a companion unit that includes prosecutors assigned to the District Attorney’s Human Trafficking Team. Additionally, Suffolk County’s Human Trafficking Court connects victims to counseling, drug treatment and job training.
Suffolk County Police Commissioner Geraldine Hart said: “The Suffolk County Police Department’s recently-formed Human Trafficking Unit actively works to identify victims of human trafficking and assists them in obtaining the help they need to escape the cycle of victimization. Through our innovative partnerships, including this latest one with Dr. Blyer, we are helping these women continue on their journey to reclaiming their lives.”
Jennifer Hernandez, Executive Director, Empowerment Collaborative of Long Island said: “The services our county executive and his staff secured today signifies more than the removal of a branding, it acknowledges that this is a home grown issue on Long Island and across our country and that we as a community are giving these individuals a chance to feel supported and cared for during what is probably the most traumatic experiences in their life.”
Dr. Scott Blyer said: “Every day we perform surgeries that transform patients’ lives and give them an approved self-confidence. I cannot imagine the amount of courage it takes for someone to change the trajectory of their lives and leave a situation like the one being discussed today.  Even after they make this huge step in their life, they still have to look in the mirror and see scars and tattoos reminding them of their horrific past. I am very blessed to have the ability to help these brave people. I look forward to helping in any way I can.”