The HooDoo Loungers played their first show in the winter of 2009 at Bay Street Theater. 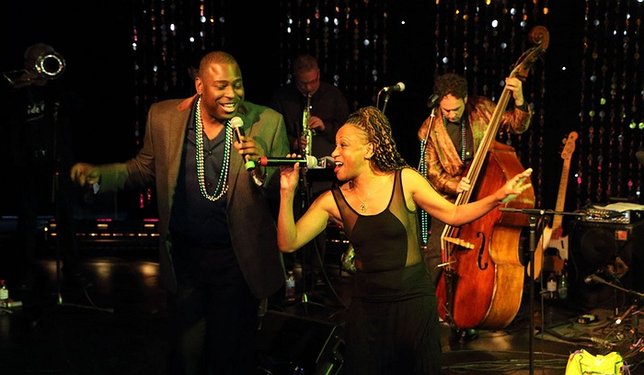 Sag Harbor, NY - January 14, 2019 - Bay Street Theater & Sag Harbor Center for the Arts is pleased to announce The Hoodoo Loungers 10th Anniversary Concert Celebration on Saturday, February 2 at 8 pm. Tickets are $30 when purchased in advance and $40 when purchased the day of the event; on sale now at baystreet.org or by calling the Box Office at 631-725-9500. The Box Office is open Tuesday- Saturday 11 am – 5 pm or until showtime.
The HooDoo Loungers played their first show in the winter of 2009 at Bay Street Theater. Joe Lauro and the New Orleans influenced band returns to the stage with this special 10th anniversary concert celebration.
The music will include some new original music and tunes from the band’s recent award-winning CD Head & Heart & Hips, as well tunes from their recent Sly & The Family Stone and Aretha Franklin tribute concerts. Special guests including Morris Goldberg, who played sax and penny whistle on Graceland, Paul Simon’s Grammy-winning album, will round out the festivities.
Bay Street Theater is a year-round, not-for-profit professional theater and community cultural center which endeavors to innovate, educate, and entertain a diverse community through the practice of the performing arts. We serve as a social and cultural gathering place, an educational resource, and a home for a community of artists.