Three banks were robbed by a perpetrator bearing the same description in each incident. 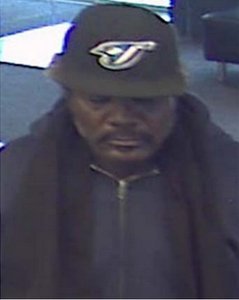 A string of robberies has been reported by the Nassau County Police Department over the past several days; the perpetrator in each was wearing a Toronto Blue Jays baseball hat. The first robbery occurred on the afternoon of Friday, January 10 in Rockville Centre, when a man in blue pants and a blue hooded sweatshirt with a black scarf entered the TD Bank on Merrick Road. The subject (pictured right) took a bank slip and wrote a note demanding money and stating that he had a gun; when presented with the note, a teller handed the man an undisclosed amount of US currency and he fled the scene.

Two similar robberies occurred yesterday, January 13. At 11:44 AM, a man in a dark hooded jacket with scarf and jeans entered the Capital One Bank on Merrick Road in Merrick and handed a demand note to the teller; the teller complied and the subject ran away. At 3:37 PM the same day, a TD Bank on Franklin Avenue in Garden City was subjected to a similar demand by a man wearing the same clothing and the victim teller again complied, handing an undisclosed amount of cash to the robber.

The NCPD has not stated that the robberies are connected, however, the subject in all three has been given the same description—a black male between his mid 50s and 60 years of age, roughly 5’10” tall, wearing a Toronto Blue Jays baseball cap  with a dark sweatshirt, dark scarf, and blue pants.

No injuries were reported in any of the robberies. Police are asking that anyone with information call Crime Stoppers at 1-800-244-TIPS (8477).

Several unrelated bank robberies have also taken place over the past week, including the same TD Bank in Rockville Centre on January 13 and a different TD Bank on Merrick Road in Merrick.