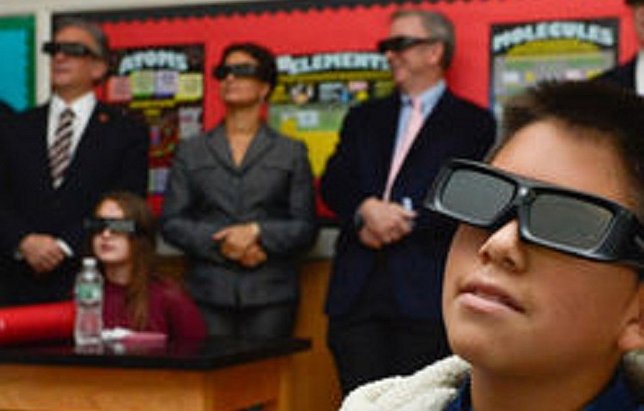 With the Smart Schools Act, school districts are investing in technology such as computer servers, interactive whiteboards, tablets, desktop and laptop computers, and high-speed broadband and wireless connectivity.

The Act, first proposed by the Governor and overwhelmingly approved by voters in 2014, supports investments in education technology that will equip students with the skills they need to thrive and succeed in the global economy. Together, these investments will help close the "digital divide" and increase access to technology and high-speed broadband in hundreds of schools across New York.

"The Smart Schools Bond act has played a critical role in expanding educational opportunity by helping schools modernize outdated classrooms," Governor Cuomo said. "This funding ensures that all of New York's students –no matter their zip code—have access to the technology that has become so essential to modern education by preparing them to meet the demands of the 21st century economy."

With the Smart Schools Act, school districts are investing in technology such as computer servers, interactive whiteboards, tablets, desktop and laptop computers, and high-speed broadband and wireless connectivity. This technology helps students to learn at their own pace, expands access to advanced courses and interactive curriculum, and enhances communication between parents and teachers. Smart schools funds will also facilitate necessary investments in pre-kindergarten classrooms, removal of classroom trailers and high-tech school security.

The 65 plans approved today by the Smart Schools Review Board and will fund several new projects, including $27.1 million for classroom technology purchases, $10.4 million for school connectivity projects, $3.5 million for high-tech security projects and $2.9 million to construct pre-kindergarten classrooms. This includes the approval of four Special Education Smart Schools Investment plans, supporting approximately $160,000 in classroom technology, $13,000 in high-tech security and $3,000 in school connectivity.

A summary of these 65 plans is available here.

The Smart Schools Review Board is comprised of the Director of the Budget, the Chancellor of the State University of New York, and the Commissioner of the State Education Department.

State Education Department Commissioner MaryEllen Elia said, "More than 175 school districts across New York State are now moving forward with thoughtful plans to ensure they have the technological tools and infrastructure to help our 21st century learners prepare for successful futures. The State Education Department continues to work to help districts prepare plans that will benefit children long after they leave school by providing them with the skills needed in today’s innovative workforce."

SUNY Chancellor Nancy L. Zimpher said, "The Governor's ongoing investment in Smart Schools equips our schools with the resources and tools needed to educate more students and educate them better. The financial support provided today will boost our students’ abilities to succeed in the classroom, in their future careers, and in life. Congratulations to all of the schools and programs that will benefit from these awards."

In 2014, Governor Cuomo called for New York State to invest $2 billion in its schools through a Smart Schools Bond Act – an initiative that would finance educational technology and infrastructure, providing students access to the latest technology and connectivity needed to succeed and compete in the 21st century economy. New Yorker’s agreed and voted in the Smart Schools Bond Act that November.

Following the proposal of the Bond Act, Governor Cuomo established the Smart Schools Commission to gather information on strategies for how schools can most effectively invest the bond funds. This advisory commission produced a final report recommending a focus on expanding robust broadband and wireless connectivity and utilizing transformative technologies. The 65 plans approved by the Smart Schools Review Board reflect many of the best practices identified by the Commission.