PTPA kicks off the theatre's Third Annual Guitar of the Stars Raffle with a signature from Rock and Roll Hall of Famer Dave Mason. 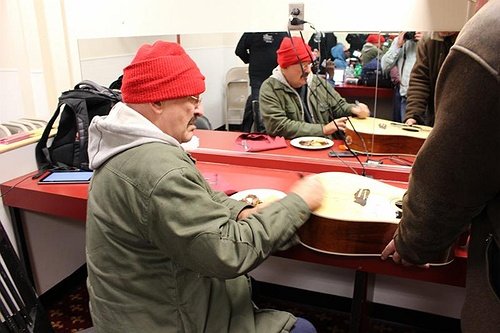 Patchogue, NY - January 13th, 2015 - On Saturday, Jan. 10, prior to his sold-out performance at Patchogue Theatre for the Performing Arts (PTPA), Dave Mason autographs acoustic guitar in support of the Third Annual Guitar of the Stars Raffle.

As over 1,200 patrons poured into the crowded lobby of historic Patchogue Theatre for Dave Mason's sold-out Traffic Jam show, Mason signed an acoustic guitar in his dressing room for PTPA's annual Guitar of the Stars Raffle to benefit the theatre's programming. Mason's signature marks the first of many performers to appear on the guitar before it is raffled away at the end of the year.

Instated by PTPA's Board of Directors in 2013, the annual Guitar of the Stars Raffle was developed in alignment with the theatre's mission to provide a broad spectrum of performing arts at affordable prices. Ticket sales from the raffle directly benefit the seasonal lineup at the performing arts venue. The signed guitar is protected in a glass case in the theatre lobby where it can be viewed throughout the year. Each year, the Washburn acoustic guitar is donated by local musical instrument store, Family Melody Center in Patchogue, N.Y.

"We always have had a special relationship with the [Patchogue] theatre," said Kathleen Zguris, vice president of Family Melody Center. "Our donation is a great way to support the arts and music scene in Patchogue."

Tickets for the Third Annual Guitar of the Stars Raffle can be purchased at the the box office and cost $5.

About The Patchogue Theatre for the Performing Arts (PTPA)
The Patchogue Theatre first opened in 1923 as the largest theatre in Suffolk County.  It still is, with almost 1200 seats. Saved by Village of Patchogue in 1996 and lovingly restored it to its original grandeur, this beautiful facility was in use 195 days with over 140,000 in attendance in our 2013-2014 season.   PTPA is an independent not-for-profit organization that leases the building from The Village of Patchogue and covers all of the operating costs without any subsidies from the Village. Our leadership is a volunteer board of directors with a professional staff and we are thriving thanks to hard work by dozens of volunteers, companies, funding agencies and individuals who support what we do by contributing their time or their money. The Patchogue Theatre for the Performing Arts is located at 71 E. Main St., Patchogue, N.Y., and can be reached at 631-207-1313 or by visiting patchoguetheatre.com.