Celebrate the grand opening of the Haitian Consular Services in Suffolk county on Thursday, January 12, 2017.

"This is an incredible step for Suffolk County and I am proud of HAUC for their tireless efforts to travel to Haitian Congregations across to county and to other organizations across Long Island to gain support from the Haitian Community,” said Assemblywoman Jean-Pierre.  “HAUC has received an overwhelming applause for this effort.  This partnership is a great start for the new year.”

Media advisory below on behalf of Haitian Americans United for Change (H.A.U.C.) 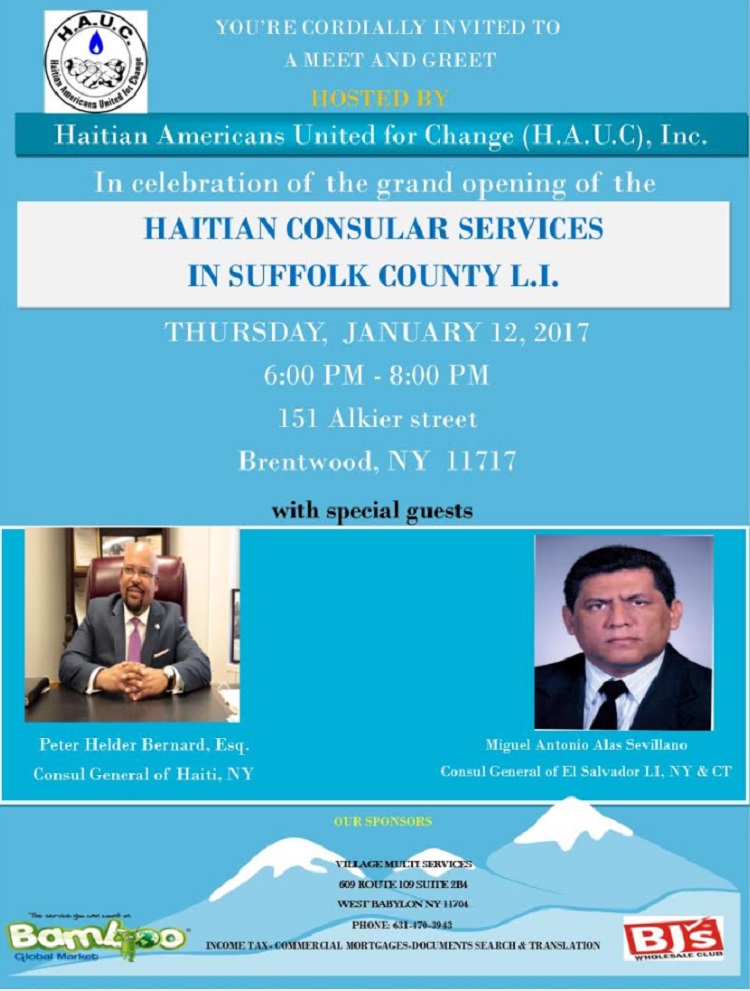 Meet & Greet for the Grand Opening of Haitian Consulate Services this Thursday Evening:

Haitian Americans United for Change (H.A.U.C), Inc. brought the Salvadoran & Haitian consulates together to bring consular services such as passports and other vital documents to the local Haitian population on  Long Island.

Thursday, January 12th HAUC will host both consulates for a Meet and Greet with the community and will serve as the official grand opening of the Haitian Consulate services.  We are extremely excited about the services that will be available to the Haitian Community on Long Island.  Services and resources should be made accessible to the people; and this will do just that with services to passport renewals and access to translate legal documents.

HAUC is committed to improving the lives of Haitians by bridging services and resources.  “Long Island sometimes is forgotten when providing much needed services and resources to minority communities, and we are here to ensure we resolve this gap issue; and immigration services is a top priority for our organization”, said the President of HAUC, Ketlie Chrispin.