Governor Cuomo Announces 10th Proposal of the 2017 State of the State: Closure of the Indian Point Nuclear Power Plant by 2021 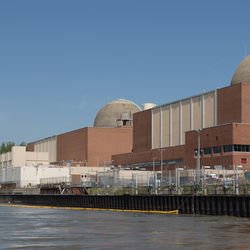 Albany, NY - January 9, 2017 - Governor Andrew M. Cuomo today announced the closure of the Indian Point Energy Center by April 2021. The aging 2,000 megawatt nuclear power plant, located 25 miles north of New York City, has presented numerous threats to the safety of over 20 million residents and the environmental health of the area. After extensive litigation and negotiation, Entergy has agreed to end all operations at the facility, with plans to shut down Indian Point Unit 2 as early as April 2020 and Unit 3 in April 2021 – 13 and 14 years earlier than required under the anticipated federal re-licensing terms, respectively. The state will continue to closely monitor Entergy to ensure public safety and mitigate safety risks associated with the plant, including for storage of spent nuclear fuel.

"For 15 years, I have been deeply concerned by the continuing safety violations at Indian Point, especially given its location in the largest and most densely populated metropolitan region in the country,” Governor Cuomo said. “I am proud to have secured this agreement with Entergy to responsibly close the facility 14 years ahead of schedule to protect the safety of all New Yorkers. This administration has been aggressively pursuing and incentivizing the development of clean, reliable energy, and the state is fully prepared to replace the power generated by the plant at a negligible cost​ to ratepayers."
​
"Shutting down the Indian Point power plant is a major victory for the health and safety of millions of New Yorkers, and will help kick-start the state’s clean energy future," said Attorney General Eric T Schneiderman. “For the past six years, my office has led the state’s challenge to Entergy’s request for a twenty-year extension of its license to operate Indian Point, and this agreement marks the successful culmination of our work to address the serious health and safety risks that the plant poses to neighboring communities. I commend Governor Cuomo for working with all stakeholders, including my office and the committed environmental advocates at Riverkeeper, to get this important deal done for New Yorkers."

Under Governor Cuomo, New York has taken unprecedented steps to ensure that safe, clean, reliable and affordable sources will provide New Yorkers with more than adequate replacement power after the plant’s closure. As a result of Governor Cuomo's comprehensive clean energy strategy the state will continue its national leadership in renewable energy and reduction of harmful greenhouse gas emissions.

Indian Point has been plagued by numerous safety and operational problems, including faulty bolts, and various leaks and fires. The densely populated surrounding region lacks viable evacuation routes in the event of a disaster, and the plant has experienced more than 40 troubling safety and operational events and unit shut downs since 2012. The plant was also once cited as the most vulnerable to earthquakes in the nation.

The Governor has repeatedly emphasized the need to monitor the safety and operations of Indian Point by both state and federal regulators. In May 2015, the facility experienced a transformer fire – the 13th unplanned shutdown at the facility since June of 2012 – demonstrating that the continued operation of Indian Point threatens not only human safety but also the environmental health of its surrounding area. Routine plant operations can kill millions of Hudson River fish with its cooling water system and the plant has a history of radioactive leaks to groundwater.

"This agreement is a win for the safety of our communities and the health of the Hudson River, and it will pay big dividends in new sustainable energy sources and the well-paying jobs that come with them,” said Riverkeeper President Paul Gallay. “Riverkeeper is thrilled that the Governor stepped up to get this deal done - just like he promised he would."

“Closure of Indian Point represents a landmark victory for the Hudson River and the people of New York,” said Scenic Hudson President Ned Sullivan. "Governor Cuomo's bold leadership in demanding and delivering on closure of the plant is a milestone that will eliminate a multi-generational threat to the health of the Hudson River and the millions of people in the region. We thank Attorney General Schneiderman for his important role in this settlement. Scenic Hudson has worked for decades to stop the massive environmental damage to the Hudson River caused by the plants’ withdrawal of billions of gallons a day of cooling water. The accelerated closure and other provisions of the settlement will protect the health and safety of New Yorkers and restore the integrity of the Hudson River. Tireless advocacy over several decades by Scenic Hudson, Riverkeeper and our partners has paved the way for a healthier Hudson River and a safer Valley.”

The results of the terms of the agreement and additional New York State contingency planning are as follows: