Royal claims to use to roof replacement technology that saves homeowners the cost of installing new roofing. 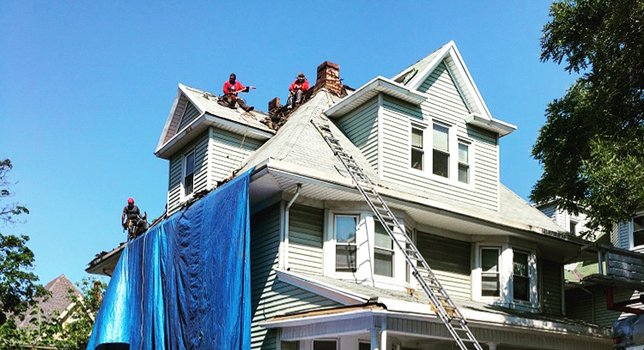 Long Island, NY - January 8, 2017 - Royal Roofing Queens has just announced their amazing new roofing technique, which involves using self adhering-roofing membranes to repair even severely damaged roofing.
Royal Roofing Queens CEO, Sean Levine, addressed the issue that he says faces many major roofing companies- unnecessary roof replacements when his company's new technique can offer simple repair at a fraction of the price.
“We’ve been watching roofers replace roof after roof, charging for new installations, one after the other when they could have just as easily repaired it,” Levine said.
Levine noted that his repair system saves you the cost of a new installation and even includes an extended warranty.
The process begins by bringing in only the most experienced professionals to work on the roof. These aren’t just roofers, they are GAF Master Elite certified technicians. They lift up the damaged roof as much as 5 inches above the gutters line; a risky move that most contractors would not attempt. After applying thick layers of waterproofing materials, including self-adhering roofing membranes, they begin to patch up or replace the most damaged roofing material. Most contractors prefer to avoid this sort of repair, and convince the client they need a new roof, which will cost them significantly more than a warrantied repair.
During hurricanes and tornados, most roofing gets damaged almost immediately; the Royal repair system claims to withstand gusts of wind up to 130mph. What’s nice is that even if a Royal roof does get damaged, the company says you can count on your long term warranty. An experienced technician will come down and fix your roof; that’s right, we said FIX.
Levine says that roofers have been taking advantage of innocent clients by replacing roofing as opposed to fixing it. What people typically don’t understand is that there are two problems involved with replacing a roof. One, it costs a great deal of money to replace a roof. Two, it shows the quality - or lack thereof - of the previous roof. If every time there is a big storm the roof needs to be replaced, how can you rely on it?
Royal’s new approach to NY roofing ensures you a sound, reliable roof along with a great value for your money. Levine said that he plans on eliminating the myth that when a roof springs a serious leak, it needs to be replaced.
“If your roof wasn’t good enough to control the leak and you are offered a replacement, it’s time to speak to as many roofing comanies possible to push for a repair alternative," he said. "If you live in NY, just call Royal Renovators."
We hope to see more of this new solution being implemented by roofing contactors and look forward to seeing more roofing myths dispelled after years of consumer misinformation.
If you are interested in learning more about the costs and advantages of repairing your roof instead of replacing it then contact: Royal Roofing Queens 68-38 Main St #2, Flushing, NY 11367 (718) 489-4009 http://www.kingsqueensroofing.com.