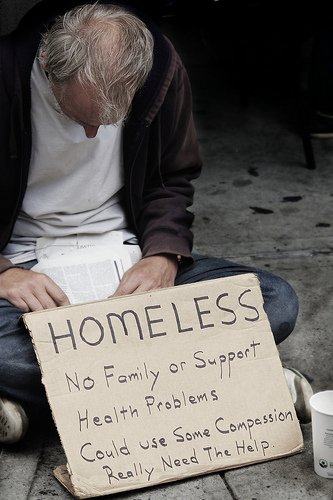 Long Island, NY - January 8, 2015 - Since 2009, Long Island Cares, Inc.-The Harry Chapin Food Bank has been providing mobile deliveries of emergency food, personal care products, nutritional supplements, clothing, blankets, sleeping bags, and even tents as part of their Hope for the Homeless Mobile Outreach Program. The custom-designed van travels throughout Nassau and Suffolk counties three days per week headed by Richard Shackelford, a member of the regional food bank's leadership team who has established a trusting and supportive relationship with Long Island's homeless families and individuals. "The nature of this population is very broad in scope, ranging from individuals living in tents, wooded areas or behind large retail box stores to individuals living in automobiles," said Shackelford. "If we encounter children in any of these homeless situations we immediately contact Child Protective Services. We also assist individuals who accept shelter housing but who find themselves on the streets in the mornings when the shelters release them."

"Attitudes towards the homeless population are usually stereotypical or misperceptions that breed anger, indifference and resentment," says Jessica Rosati, Chief Program Officer for Long Island Cares, Inc. "The public cannot often grasp the many different reasons why people become homeless and they often forget that at one time most of these individuals did live a 'normal' productive life. Now they carve out a bubble of existence and our program is allowed into that bubble. We believe that is a direct result of our approach and philosophy which is that we are all the same and deserve to be treated humanely. Our program is unique in that it provides consistency to the population, building relationships and providing food, ensuring health first. Our goal is to make sure the homeless have easy to eat, nutritious food that will keep them from seeking food from unhealthy sources such as dumpsters and garbage cans. Eating food items from these sources can and has caused serious illness in the homeless population resulting in emergency room visits, hospitalization and even death. Annually we lose 10-15 homeless individuals, mostly as the result of the elements in which they live, triggering illness and accidents," said Rosati.

On average, Long Island Cares is able to help 350-400 homeless people each month and between 2% and 5% of these individuals are referred for additional support services, primarily food pantry locations, soup kitchens and the Department of Social Services (DSS). The food bank staff is joined on their rounds by local DSS staff which includes Nassau County's Homeless Intervention Task Force (HIT Team), Suffolk County's One Warm Bed Program or other homeless advocacy organizations.

Long Island Cares recently received a $70,000 grant from a private foundation to support food purchases and staff for the Hope for The Homeless program through the end of 2015. Additional products delivered to the homeless population are donated by local corporations and other private donors. Long Island Cares absorbs maintenance and travel expense for the Mobile Unit into its operating budget.

For more information or to support Long Island Cares' Hope for the Homeless program call (631) 582-FOOD.