The family of slain ex-NYPD officer James LaRossa, who was murdered in his North Carolina home in April at the hand of his wife, wants justice in the case that has fallen out of the ...

James “Jimmy” LaRossa, a 51-year-old retired NYPD officer from Massapequa, a “fine man by all accounts” according to his family, was stabbed to death in his North Carolina apartment in April.  His estranged wife, Carole LaRossa, was immediately taken into custody and charged with murder by the Charlotte-Mecklenburg police department, according to the Charlotte Observer. 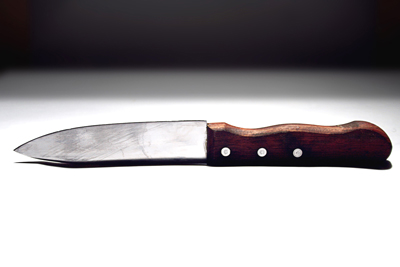 Police said that the LaRossa’s had gotten into an argument that escalated into the stabbing.  According to LaRossa’s ex-brother-in-law, Bill Cox, a retired homicide detective for the NYPD, LaRossa was stabbed in the chest, and an additional 19 times in the back, while Carole LaRossa had non-life threatening injuries that appeared to be self-inflicted.
But sometime between April and the January, the case began to fall apart, according to various members of LaRossa’s family who now report that District Attorney David Kelly is poised to offer Carole LaRossa a plea deal.
Lauren Cox, LaRossa's goddaughter and niece, first learned of how gruesome his death was when she and her mother helped plan his funeral a week after his murder.  At that time, Cox and her family were assured that Carole LaRossa would be brought to justice.
"They assured us over and over that they were so confident they were going to get her for murder on this, and then all of a sudden everything changed. Out of the blue with no warning, no information, nothing. The last court date was the first week of December, and we were informed that they would be deliberating whether or not to offer a plea bargain to her - the one they guaranteed us was that she would not escape without jail time," Lauren Cox explained.  She also pointed out that the local District Attorney has a history of sentencing men more harshly than convicted women.
According to Bill Cox, the District Attorney informed his ex-wife, Grace LaRossa, that he was worried that taking the case to trial would drag the slain ex-officer’s name through the mud.  Grace, who had been receiving updates throughout the investigation, was shocked to hear on Jan. 4 that the DA was seeking a plea deal to serve less than three years.
During their divorce proceedings, which were never finalized, Carole LaRossa had filed a domestic violence complaint against her husband.  “That’s a problem? Show me a divorced couple and I will show you multiple restraining orders against one party or the other,” Bill Cox wrote in a letter to District Attorney Kelly.
According to Cox, DA Kelly also listed various other issues with bringing the case to trial, including a report that James LaRossa at one time had a controlled substance in his system as part of a pain management treatment after he underwent a series of back surgeries related to the injuries that led to his early retirement.
Cox also claims that any homicide detective could testify as to whether or not Carole’s injuries were self-inflicted, as well as any medical examiner or emergency room physician.  She had also claimed her husband sexually assaulted her, but the results of any post-assault examination do not appear to be a factor in the case.
The LaRossa’s 13-year-old daughter, who was at a sleepover at the time of the murder according to news reports, is now living with her mother once again.  “You know as well as I do, that if the bodies in this case were reversed and Jimmy had brutally stabbed Carole 19 times in the back, you would have not released him and you would not have allowed him any contact with his minor child, regardless of bloodline,” Bill Cox wrote to Kelly, calling it “shameful” that Carole has contact with the young girl.
Now, the family of James LaRossa is trying to gain attention for this case and is asking friends, family or anyone who wishes to help them secure justice to contact DA Kelly’s office and request a trial.   “We can stand mud. What we cannot stand and will not stand is to have his killer serve a bargained deal of less than 3 years,” said Bill Cox.
"My uncle dedicated his life to protecting and serving, and now it's our time to protect and serve him. He deserves better than to have his case swept under the rug like it's nothing," Lauren Cox said of her family's effort to bring this case to trial.
“I miss him dearly,” Bill Cox said of his ex-brother-in-law and friend, who he describes as a stand-up guy who was dedicated to his daughter, and who relocated his family to North Carolina in order to give them a fresh start after Carole had gone to rehab for alcohol abuse.  LaRossa worked as a NYPD cop in the 77 precinct and later in Queens.
Share your thoughts on this article by posting a comment below or by visiting our Long Island Living discussion forum.