The U.S. World Cup medal count is up to 10 for the season. 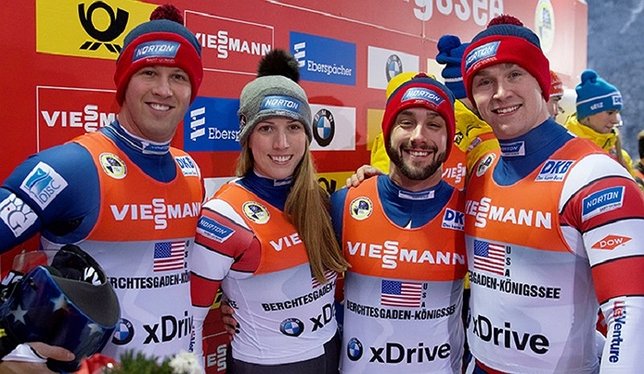 Koenigssee, Germany - January 6, 2017 - USA Luge made it two team relay medals in two races this season when Erin Hamlin, Tucker West and the doubles team of Matt Mortensen and Jayson Terdiman combined forces Friday in Koenigssee for a silver medal in the Viessmann World Cup Team Relay, presented by BMW.

The only other relay occurred a month ago in Lake Placid when the Americans collected a bronze medal. USA Luge is second in the World Cup standings, merely five points behind Canada, which finished fourth to end the holiday program in this Bavarian vacation destination.

The U.S. World Cup medal count is up to 10 for the season.

“The four of us brought it together today,” said Sochi Olympian, Terdiman, from Berwick, Pa. “It’s our best of the year so far. We’re very happy with the effort.”

Four more team relays are on the slate this season, including the Whistler makeup race next weekend in Sigulda, Latvia.

“The conditions were a lot better today,” remarked Mortensen, Sochi Olympian from Huntington Station, N.Y. “The snow kind of hampered us a bit. But the U.S. put a really good effort in today. I’m really happy with Jayson and I, personally, as well as the others.”

Germany took advantage of home ice as all four of their athletes in the team relay – Natalie Geisenberger, Ralf Palik and the doubles team of Tobias Wendl and Tobias Arlt - hail from the Koenigssee region.

Yet they flirted with disqualification when Palik, anticipating Geisenberger’s touch of the pad to open the start gate, nearly barged. He re-set, but struggled down the ramp to get his run underway, before fixing that, too. And then Wendl and Arlt anchored the gold medal.

The Americans had three consistent runs, leading to their runner-up finish in 2:43.229, with Austria taking bronze in 2:43.617.

“This really shows the depth of Team USA,” stated West. “We are a powerful team when we can all put together clean runs. We’re huge contenders and looking forward to the rest of the season.”

“It was great to have these conditions after the snow yesterday,” added Hamlin, Sochi Olympic bronze medalist from Remsen, N.Y. “I had a good run. I’m very happy with the result. It was redemption after only a one run race yesterday.”

Hamlin’s reference was to a significant two-day snowfall that hampered Thursday’s doubles race, and reduced the ensuing women’s singles event to just one heat.

On Friday, the snow globe conditions gave way to clearer and colder weather, leading to a faster track. West, in ninth place, was the USA’s best in singles, although each of his two runs started with medal-winning potential.

The Ridgefield, Conn. luger is part of the shift in power that became evident last season and has now become a sea change. Russian Semen Pavlichenko, the 2015 World Champion, walked into the Koenigssee lion’s den and became the king, near King’s Lake, on this day.

Wolfgang Kindl, of Austria, resumed his weekly visit to the podium, taking the bronze in 1:38.823.

Missing from the medals was another Bavarian local, Felix Loch, who settled for fourth place. The five-time World Champion was over 0.5 seconds behind Pavlichenko. Loch’s fifth world title occurred here last winter. He has one World Cup victory this season.

World Cup leader, Roman Repilov, a rising star from Russia, finished fifth. The two-time Junior World Champion remains atop the overall standings. Kindl is second, with Loch third. West is in a tie for sixth with Palik.

The American appeared headed to a podium result. His starts were at the top of the field in both heats, and the split times followed suit. But he scrubbed time at the end of the first heat, putting West in 15th place. In the final run, he rallied to ninth in 1:39.264.

“It wasn’t the best go-round for me,” said the 21-year-old. “The first run I had some issues down low, through the chicane mainly. In curve 14 I had a large skid which cost a lot of time. I was 15th after the first run, but was able to have an awesome second run. Top 10 I’m thrilled with. Overall, the race could have been better, but I can’t complain. I’m showing that I have speed and am excited to see what the rest of the World Cups have in store for me.”

When the day concluded, Mazdzer, who was a career-best third in the overall World Cup standings last season, took to King’s Lake to rinse himself of the spirits of misfortune. It’s hoped those apparitions don’t get on the flight to next weekend’s races in Sigulda, Latvia.

Viessmann World Cup racing, in Sigulda, is set for January 14-15 and will offer an action-packed weekend. In addition to the singles and doubles races, there will be a BMW Sprint World Cup and the team relay event, presented by BMW.

USA Luge will next appear on NBC Sports Network with World Championship coverage from Igls, Austria. The cable network will air one hour on January 29 from 4-5 PM EST.