Shannon Beattie, a senior at William Floyd High School, was named one of 300 semifinalists from across the nation in the 2016 Intel Science Talent Search (STS), the nation’s most prestigious pre-college science competition. 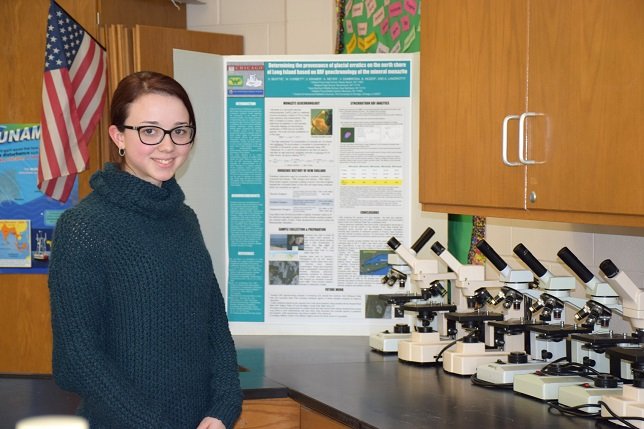 Shannon’s project, “Determining the Age and Provenance of Glacial Erratics on the North Shore of Long Island Based on XRF Geochronology of the Mineral Monazite to Better Understand Glacial History,” was designed to calculate the mineral’s age of crystallization of boulder samples from Wildwood and Caumsett State Parks on the north shore of Long Island. Samples were tested at the Brookhaven National Laboratory’s National Synchrotron Light Source and compared to published* ages of similar basement rock from Connecticut, where it was determined that they originated from approximately 40 miles to the north. (*Geologic Society of America Bulletin)

Video of Shannon finding out she's a semifinalist.

Shannon was extremely excited about being selected as a semifinalist and her hard work throughout her academic career has paid off. Her love for nature began when she was young going on camping trips with her family. One particular visit to the Columbia Icefield in Canada when she was 7-years old left quite the impression on her. Then when she returned 10 years later, she was alarmed by significant recession of the glacier. As a result of these experiences and her research, she hopes to pursue a college and career path in environmental science.

“I am incredibly proud of Shannon and her hard work,” said Victoria D’Ambrosia, William Floyd High School Research teacher and one of Shannon’s mentors. “Her innate critical-thinking abilities, determination, and intrinsic motivation are evident in her becoming William Floyd High School's first Intel semifinalist. I could not be more excited for her and this accomplishment.”

Shannon’s other mentors include Dr. Antonio Lanzirotti, a geochemist from the University of Chicago, and Robert Mozer, CPG, a William Floyd Middle School science teacher.

For becoming a semifinalist, Shannon receives a $1,000 scholarship for herself and $1,000 for her school, as well as a chance to be one of 40 finalists selected to go to Washington D.C. to participate in final judging, displaying their work to the public and meeting with notable scientists and government leaders. Each year, Intel STS semifinalists and finalists compete for $1.6 million in awards. Finalists will be announced on Wednesday, January 20.