Speakers will share personal memories and scholarly assessments of conditions at the Auschwitz concentration camp Sunday, Jan 25 at the Holocaust Memorial and Tolerance Center of Nassau County in commemoration of the 70th anniversary of ... 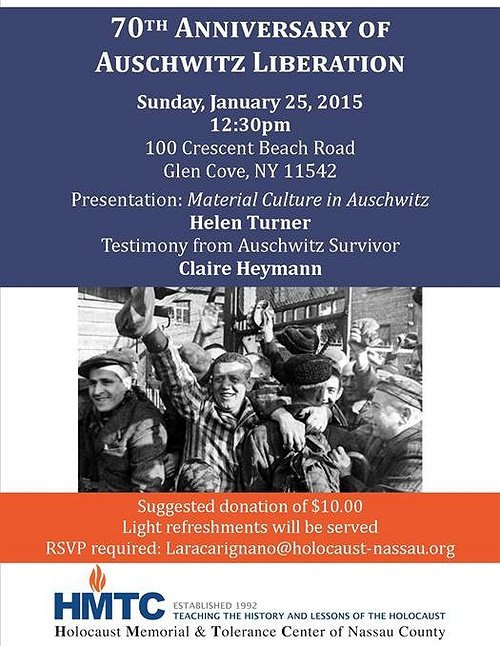 Glen Cove, NY - January 6, 2015 - Speakers will share personal memories and scholarly assessments of conditions at the Auschwitz concentration camp Sunday, Jan 25 at the Holocaust Memorial and Tolerance Center of Nassau County in commemoration of the 70th anniversary of the liberation of Auschwitz. The day is also known as International Holocaust Remembrance Day.

Holocaust survivor Claire Heymann of Queens will share memories of her life in pre-war Germany, her imprisonment at Auschwitz and her post-war life in New York.

Born in Germany in 1924, Claire Heymann’s family home was destroyed during Kristallnacht by Nazi storm troopers, and her father imprisoned in Dachau. In 1941 Ms. Heymann was arrested by the Gestapo and put to forced labor. Her parents were deported to Lublin and murdered in Majdanek. In 1943 she was sent in a cattle car to Auschwitz. She survived the ordeal and in 1947 emigrated to New York. She resettled in Fresh Meadows in northeast Queens.

In addition Helen Turner of Smithtown, a graduate student in History at Stony Brook University, will speak about living conditions and private property at the camp. Ms. Turner, a staff member at the HMTC, will present a talk on “Material Culture at Auschwitz” in which she will describe how prisoners’ belongings were confiscated, sometimes distributed to Germans, and partially replaced by objects custom-manufactured for the camps.

Auschwitz was a network of concentration, extermination and labor camps operated in areas of Poland annexed by Nazi Germany during the second world war. Prisoners remaining at the camp were liberated Jan. 27, 1945, today known as International Holocaust Remembrance Day.

The Holocaust Memorial & Tolerance Center of Nassau County is located at 100 Crescent Beach Road in Glen Cove, NY. A donation of $10 is suggested. Light refreshments will be served. RSVP required: Laracarignano@holocaust-nassau.org For more information, call 516.571.8040. For more information visit the website. Program begins at 12:30 pm.