Police apprehended the couple that are believed to have been involved in a string of armed robberies where they held up nail salons in both Nassau and Suffolk Counties. 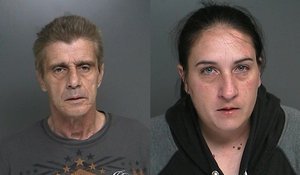 On New Year’s Day, Suffolk County Police arrested the couple that is believed to be responsible for the armed robbery of five nail salons across Long Island.

Salvatore Scimeca, 55, and Elise Sandberg, 34, of Islip Terrace were apprehended by police in connection with a string of robberies in December, and will also face court dates for additional similar robberies in Nassau County.

The series of armed robberies started in Suffolk County on December 13, when a man entered Nail Tek salon at 190 Islip Avenue in Islip at 6:15, pointed a handgun at the employees, and demanded their cash.  Within an hour, the same suspect entered Diamond Star Nail Inc. at 572 Main Street in Islip and displayed his gun again and stole cash from the register.

Two days later, the same man attempted to rob Charming Orchid Nail and Spa, located at 64H Carleton Avenue in Islip Terrace, but he did not leave with any cash.  Just 15 minutes later, he instead held up and robbed Queen Mary Nails at 126 East Main Street in East Islip.

At 6:50 p.m. on December 31, the suspect struck again, and robbed Nail Plaza at 856 Montauk Highway, Copiague.

Both Scimeca and Sandberg are due to be arraigned Thursday morning at the First District Court in Central Islip.