Long Island Ferries - Traveling To & From LI Via Ferry Boat 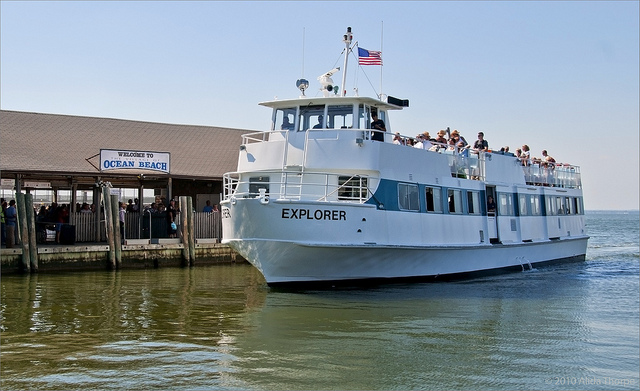 Davis Park Ferry Company Inc.
The Fred Sherman family has owned and operated their ferry business since 1947. From two small wooden boats, it has grown to a fleet of six steel- or aluminum-hulled ferries and a freight boat. Departures leave Patchogue every 60–90 minutes for the 20–25 minute trip across Great South Bay from mid-March through November.

Passengers leaving Patchogue for Davis Park will use the terminal at Country Road 83. Parking is free for Brookhaven residents at the Sandspit Park and Marina at 80 Brightwood St. Parking is also free for Brookhaven residents at the Watch Hill terminal. There is a charge for non-residents. Watch Hill travelers will leave Patchogue from the terminal at Country Road 19.
In addition to regular ferry service, Davis Park Ferry Company offers water taxi transport for those who miss their ride, are enjoying after-hours activities or need off-season service. With prior reservations the ferries can be chartered for private parties and celebrations, school trips, romantic dinners and sunset cruises.
Fire Island Water Taxis
Although local water taxis do make trips across Great South Bay, their primary function is to ferry visitors back and forth between the various communities and places of interest on Fire Island. They are available 24 hours a day, weather permitting and run on an hourly schedule during the busy summer season as well as weekends during off-season. Trips to Water Island, Davis Park, Barrett Beach and Watch Hill are on a demand basis with at least two paying passengers.
To locate water taxi landings, look for pilings displaying their distinctive sign. Posters are usually close to the ferry docks.

Expect a fast and windy trip when riding a water taxi. Moving at speeds of 30 knots (35 mph), these boats provide an exciting ride from start to finish. However, they are all safely piloted by USCG licensed captains, and bench seating is available indoors for those who prefer a little less wind. Of course, the more adventuresome may enjoy the same bench seating out on the deck.
Passengers pay their fare, which is determined by the distance to the destination, once on board, and as with a regular taxi service, tips are always appreciated. Children under the age of 12 and dogs pay 50 percent of the regular adult fare. There is no fee for infants under the age of 2. Small freight and bicycles are also charged per item. Since frequent traveling by water taxi can become rather expensive, many visitors choose to walk one way to their destination and take the water taxi back later.
Recently, the Fire Island Water Taxi Application has been made available to Android smart phone users.
Fire Island Communities And Attractions
From Shelter Island
Shelter Island sits comfortably between the North and South Forks, surrounded on three sides by Shelter Island Sound and on the fourth side by Gardiner’s Bay. It was first settled in 1652 by Nathaniel Sylvester, a sugar merchant from Barbados who built a home on the island for his 16-year-old bride. By 1730, the village had grown to be a town and a refuge for persecuted Quakers. By 1872, it had become a romantic, rural residential area. The first ferryboat service was offered by the Boisseau family from Stearns Point.
During the early 1900s, fish-processing plants were set up on the island, and with the prosperity of that time came more summer camps and permanent homes. However, the Depression left many places abandoned. It wasn’t until after World War II that summer visitors began to return. In the ‘60s and ‘70s, families began to move permanently to Shelter Island, and the population has slowly increased to approximately 2,400 full-time residents. Fans of the feature film “Shelter Island” might recognize some of the scenes shot on location.
North Ferry
The North Ferry Company was established in 1868 to connect Shelter Island to the North Fork at Greenport. It is owned by the Shelter Island Heights Property Ownership Corp. Three ferries are in active, year-round service. They provide a short ferry ride that averages eight minutes in length. Departures leave every 15–20 minutes from early morning to late evening, with extended service hours in the summer. Passengers, autos, vans, and pickup trucks that are less than 22 feet in length are loaded at one of the two docks at the base of Shelter Island Heights. Loading is on a first-come, first-served basis. Over-size vehicles are charged by length, weight and number of axles. Travelers can purchase one-way or same-day return tickets. Pedestrians pay each way. Adult fares cover both vehicle and driver. This applies not only to cars and trucks, but also to bikes and motorcycles. Additional passengers pay separately and each way. There is no charge for children younger than 10 years of age or for pets. Subsidized tickets for residents and discounted commuter passes are also available. All payments are by cash or local check. Credit cards are not accepted. The ferries are handicap accessible.
For pedestrian travelers, tokens may be purchased from the office or the machine at the passenger terminal. Subsidized tokens are also available at the office. Cyclists and motorcyclists should wait at the staging area in front of the terminal building until directed to load. Vehicle, bicycle and motorcycle fares are collected from those who have boarded.
Travelers from New England will catch the Cross Sound Ferry in New London, Conn. and land at Orient Point on the North Fork. From there, follow Route 25A west to 114 South to Wiggins Street in Greenport. Follow Wiggins Street as it loops to form a line across the street from the ferry.
Travelers leaving Shelter Island should wait in the ferry line that is to the right of the white line. Free parking is offered at the lot on the nearby street.
South Ferry
In the late 1700s, Samuel Clark of Connecticut moved to Shelter Island and began a rowboat service between Hog Neck, now known as North Haven, on the South Fork and the south side of Shelter Island. His ferry business has been carried on by five generations of Clark family members. Brothers Cliff and Bill Clark share ownership of the South Ferry Company today and assert that it may well be the longest continuously running ferry service in America. From the original two wooden boats, the fleet has grown to four ferries. The two newest additions, the Sunrise and the Southern Cross, are outfitted with modern, eco-friendly technology.
The South Ferry Service operates year round, weather permitting, from early morning to late evening. Hours are extended during the summertime and weekends when tourists flock to this bucolic little island. Departures leave every 15–20 minutes for the 4–5 minute crossing. Autos, vans, and trucks less than 20 feet in length are transported for one fee. Oversize vehicles are charged a separate commercial rate. There is also an additional charge for bumper racks. Drivers or riders are included in the vehicle fare for one-way or same-day return trips. Passengers and pedestrians pay each way.
Travelers coming from Long Island will pass through Sag Harbor and follow 114 North to North Haven and the South Ferry terminal at 399 Ferry Rd. Route 114 is also the main thoroughfare across Shelter Island.
In addition to ferry service, the South Ferry Company hosts private parties, dinners and celebrations. A minimum of two weeks’ notice is required. Assistance with music and catering services is also available.
For Additional Information on LI’s Ferries, Waters, and Transport, Visit the Following Resources: