Two firefighters have been killed, and at least two others are injured after being shot by an unknown gunman when responding to a house fire in Webster, NY. 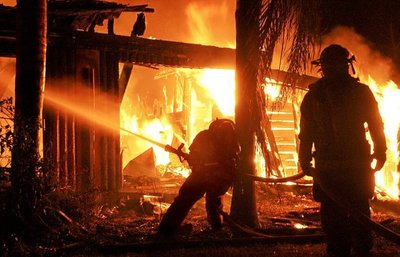 The recent buzz about gun laws is about to grow after the fourth mass shooting this month that occurred Monday morning, when a gunman shot at least four firefighters who were responding to a house fire in Webster, New York.

The gunman opened fire on the first fire crew that arrived on the scene.  Two of the firefighters were killed, and two were injured and are currently being treated at Strong Memorial Hospital.

After the initial shooting around 6 a.m., the firemen were told to retreat from the blaze by a SWAT team while they searched for the shooter, as the unknown gunman was still on the loose.  As of 10 a.m., the gunman was still not found.  The blaze had spread to three houses and a car, and the fire department moved back in to extinguish the blaze and prevent further damage.

Officials say there is no active shooter on the scene, but they are currently following leads that there may have been more than one gunman.